Emma Daker describes a jewellery-making project which has successfully integrated some migrant and refugee women into the community. 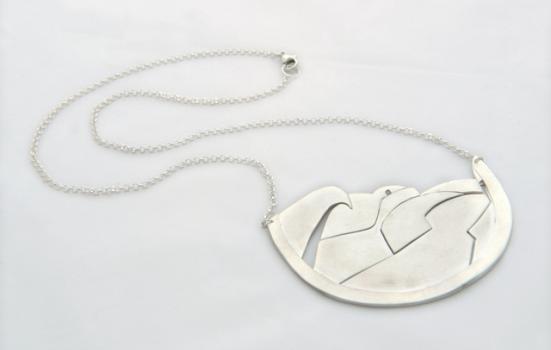 Shelanu, meaning ‘belonging to us’, is a collective of migrant and refugee women producing high-quality jewellery. The jewellery is inspired by a sense of place, the adopted city of Birmingham and experiences of migration. Shelanu works with professional, contemporary makers to develop commercial ranges, respond to commissions, facilitate workshops and create exhibition pieces.

The aim of the collective is for the migrant and refugee women to learn new skills in a safe environment, build their confidence and self-esteem while improving their English, and learning transferable skills. It also aims to create a network for women who are often not allowed to work and can become isolated due to their situation.

Kinneret, one of the members of the group, says: “It’s a place to learn and try new skills, a place that I can feel connected and free to try new ideas... It’s a positive way to contribute and find your place in a new city.” She has since gone on to undertake a part-time jewellery course at the School of Jewellery in Birmingham.

Another member Mary says: “We’ve learnt a lot of new things. We gathered lots of ideas, met each other for the first time and made new friends. It’s brought people together from all over the world.”

My organisation Craftspace, a craft development organisation based in Birmingham, launched Shelanu at the Contemporary Craft Fair in Devon in June 2011, although its roots began in 2004. The collective grew from a collaboration between Craftspace and the Community Integration Partnership (CIP), an organisation which helped migrant, refugee and asylum-seeking women to integrate into new communities. (CIP has since closed.) We had been concerned with the lack of diversity in the contemporary craft sector. The survey ‘Craft in an Age of Change’ found that 81% of the craftspeople who responded were White British.

We concluded that social enterprise could be a vehicle for the women to move from being beneficiaries of art projects to producers in their own right, creating a real opportunity to progress, exercise autonomy and explore collective-making. For us, artistic development is inextricably linked to audience development and engagement work, and expanding ownership of craft through building relationships between artists, people and organisations. Shelanu currently has six members from Israel, Hong Kong, China, Burundi, Montserrat and Kurdistan, Iraq, and it is envisaged that this core group will pass on their skills to new members.

Shelanu has so far created three ranges of work. ‘Routes to Trade’ was the first produced with resident artist Kathryn Partington. Each woman created a collection of work inspired by the city of Birmingham and its industrial past. It was received well at the Contemporary Craft Festival and exhibited at the Southbank Centre last summer, but it was not a sustainable way for the group to work.

The collective then worked with Birmingham jeweller Rita Patel to create a product range that was designed and made collectively. This enabled new members to be trained to work on the range. ‘Migrating Birds’ is the resulting work, which has been accepted for craft fairs and exhibitions.

At the end of last year Shelanu was then commissioned by the Herbert Art Gallery and Museum in Coventry to create a limited edition range of work to sit alongside its exhibition ‘Caught in the Crossfire’. This was the first time the venue had commissioned work directly from makers. A quarter of the collection sold in the exhibition’s first week.

The intention is for Shelanu to grow, increasing its contribution to the contemporary craft sector and creative economy, alongside developing the cultural capital in the local communities through workshops and membership.