Isabel Jones talks to Esther Harris about the inspiration behind her recent work with visually impaired dance performers. 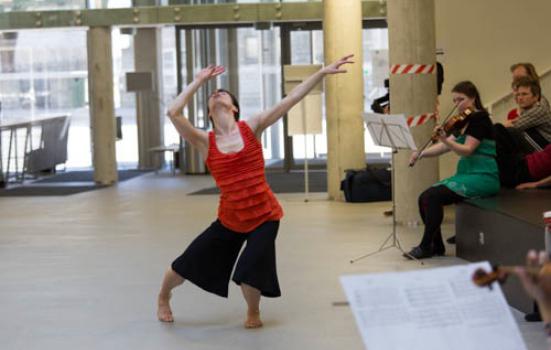 For thirty years Isabel Jones through her company Salamanda Tandem has been crusading on behalf of thousands of people with disabilities, helping them to enjoy a range of arts on their own terms. The company, whose name was inspired by the creature that can regenerate its own limbs, has its roots in the explorations of touch-based movement that Isabel conducted during the early 1980s with blind, visually impaired and sighted people, and her body and voice work with children with autism. The company evolved into an ensemble of professional artists committed to working with all kinds of people who have limited access to the arts, primarily those with disabilities, but also prisoners, children in secure units, hospital patients, carers and elderly people.

But 2012 was bleak. Local councils and arts organisations were increasingly cash-strapped and red-taped bound. The situation was then compounded by the government’s announcement that it would review people’s disability benefit and independent living allowance, potentially taking away the little cash and freedom of choice people with disabilities had left. At home her mother’s dementia was  worsening; and then her father and lifelong mentor, Lewis Jones, a talented artist who never let his deafblindness impinge his love and exploration of the arts, passed away. “I felt I had lost my spark,” Isabel admits. “I did wonder if this was the end of Salamanda.”

Feeling low after her father’s funeral, Isabel returned to Tyn y braich in Wales, to the farm where he grew up. She closed her eyes and went exploring. "I wanted to start where my father began, and experience it exactly as he would have done.” Lewis Jones left Wales aged seven to attend a special school for blind children in Birmingham. Before he boarded the bus out of the countryside, he used to race into the fields and “bathe his eyes in the bluebells, to take in the colour and smells”. Isabel continues: “He lost all his sight shortly afterwards but the sight and feel stayed with him forever. This time it was me who breathed in the sounds of the country and noted the smells and textures."

Shortly after, an associate asked her to curate a new symposium in Estonia. Entitled ‘FRAGILE?', its aim was to explore how inclusive dance is for visually impaired people. “Many artistic communities in Europe are some way behind the UK in how they treat and include dancers with disabilities,” explains Isabel. “This offered a real opportunity to show what visually impaired artists are capable of doing to those communities that don’t really see people with disabilities as ‘proper’ artists.” She linked up with trusted colleague Mickel Smithen and a new associate, Indra Slavena, originally from Latvia. Both are visually impaired. Indra, a thirty-two-year-old dancer, had to overcome terrible hardship to realise her dream to dance and be accepted by her peers. Isabel tells: “My father carried much of his artistry inside him in his inner world. He didn’t have much respect for the body – he said it was just a vehicle for carrying his brain. But as an able-bodied ballet dancer, I felt the body could do and express so much. When I saw Indra perform for the first time, she brought the best of both worlds to life – the able body and that inner world of my father’s. I knew she would move audiences as she had moved me.”

Indra and Mickel’s performance broke new ground. “Our partners for the conference came from Norway, Estonia and Portugal. The four Norwegian dancers moved around their disabled performer, making her disability the centre of the piece. When they saw Mickel and Indra perform this beautifully constructed piece, together − two independent blind dancers – it blew them away. Afterwards they came up and asked if they could train with us in the UK and learn our approach.”

The week after FRAGILE?, The Independent on Sunday got in touch to say that an associate of Salamanda Tandem had nominated Isabel for the Independent’s Happy List 2013 - a list of 100 people in the UK who give and inspire others expecting nothing in return: "They called me a ‘joy giver’. I might trade in my current title of artistic director for that one.”

Esther Harris is a freelance writer and editor.
www.salamanda-tandem.org

Dancing with the long cane
Inspired to continue