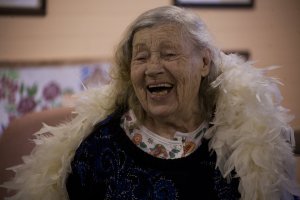 As a result of work undertaken by the Library Theatre Company (LTC), which focused on broadening access to cultural activities for older people, it was felt that there was a lack of active theatre and drama activity on offer for older people. Storybox was developed in response to this. In partnership with Shore Green, a specialist care facility run by Irwell Valley Housing Association, which offers specialist support to elderly residents who suffer memory loss, the project used drama and storytelling to engage older people with Alzheimer’s and dementia in active, creative activities.

The project aimed to allow older people with Alzheimer’s and dementia to participate in creative activities in a manner that felt comfortable and met their own personal needs. We wanted to use drama and storytelling as the key tools for engagement; allowing space for reminiscence, but not using it as the starting point of the creative journey. The idea was to use music, props and costume to support make-believe worlds for stories to be told in and acted out. Artists Sara Cocker and Lowri Evans chose themes that were accessible, evocative and had filmic qualities, such as ‘A Hollywood Premiere’, ‘A Seaside Pier’ and ‘A Western Saloon’. These archetypal themes were easy for participants to relate to, as well as play in.

Typically a session began with warm-up games to promote a sense of togetherness, build confidence, aid concentration, and awaken the imagination. Handling props, listening to music and wearing costumes led to discussions about the theme and stories were made up and enacted.

On the final session there was an Oscar’s ceremony where participants were awarded certificates and given photographs of themselves taking part in previous workshops. These served as a reminder of the project and as a way of sharing what they had done with family and friends.

The sessions were popular and became an anticipated part of residents’ weekly routine.
Both staff and residents noted how effective the workshops were at engaging residents and building confidence, particularly those whose needs were more acute.

Following the success of the pilot, LTC is looking for ways the project can be developed. Funding has been secured from the Paul Hamlyn Foundation to expand the project over the next three years in partnership with the Alzheimer’s Society. Training opportunities will be developed to teach artists how to work with this target group and run similar projects. We will also be working with Manchester University to develop a robust evaluation framework, using clinical assessment methodologies to document the effects that participation in the project has on the emotional and physical wellbeing of the individuals taking part.