A tube with a view

The View Tube is growing something green atop of, well, sewage. Angela Law and Rosie Murdoch tell all 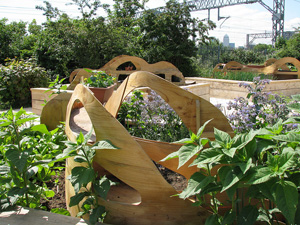 Built from recycled shipping containers, the View Tube was opened in 2009. In two years it has attracted over 250,000 visitors, from parents with small children, to pensioner walking groups, cyclists, schoolchildren, dog walkers and local artists.

The View Tube is a bright green structure located on the Greenway, a footpath and cycle path which runs along the embankment containing the Northern Outfall Sewer, and is perhaps an unlikely spot for an emerging arts programme. It offers a café, a volunteer-run garden which stocks the café kitchen, a classroom and outdoor education space, a cycle hire facility, exhibition spaces and, uniquely, it has panoramic views across the Olympic Park. Recent additions to the vista include the ArcelorMittal Orbit, designed by Anish Kapoor and Cecil Balmond, and the new Westfield shopping and leisure development in nearby Stratford.

Straddling three of London’s most deprived boroughs – Hackney, Newham and Tower Hamlets – the View Tube was originally funded by regeneration agencies, the Olympic Delivery Authority and London Thames Gateway Development Corporation, with support from Thames Water. Without the budget for an arts and culture programme, in the early days artists offered to show their work for free, for a chance to make sales to visitors to the Olympic Park. Exhibitions were organised to coincide with First Thursdays, late night arts events held on the first Thursday of the month in east London.

In 2010, working alongside the View Tube Manager, curator Alice Sharp was commissioned to fundraise and develop an initial arts programme. View Tube Art has emerged as an arts programme which highlights the natural, cultural and industrial history of the area. Works to date include Gavin Turk’s bicycle 4H, Hilary Powell’s The Games, Lisa Cheung’s Summer Palace and Köbberling & Kaltwasser’s Goal – a large-scale structure mimicking the finish line of a race. A recent collaboration with the National Portrait Gallery involved an exhibition of portraits hung on the open-sided containers, together with a series of community workshops led by photographers including Katherine Green, Emma Hardy and Brian Griffin.

The View Tube is a welcome addition to east London’s arts infrastructure. As part of Create – an annual festival which promotes home-grown talent and participatory arts in east London – in summer 2010 the View Tube hosted philosopher Theodore Zeldin’s Feast of Conversation where, over lunch, almost 200 people took part in an afternoon of debate about all manner of different topics with total strangers. Links have also been made with local arts and cultural groups including the Bromley by Bow Centre, Stratford Rising and the Stour Collective in Hackney Wick. Currently, View Tube Art is presenting its inaugural exhibition entitled Sparked, with Tomas Klassnik and Riitta Ikonen. The eight-month series of educational events has been inspired by the integrated public art commissions in the Olympic Park.

The View Tube has bridged a gap – fulfilling the need for a ‘view, brew and loo’ – as well as showing View Tube Art, a programme of topical and responsive works inspired by the building’s green credentials, community spirit and the breathtakingly dramatic backdrop of east London as it undergoes an unprecedented transformation.

Angela Law is an independent arts and regeneration consultant and Rosie Murdoch is Manager of the View W www.theviewtube.co.uk