‘The Cultural Leadership Handbook: how to run a creative organization’ 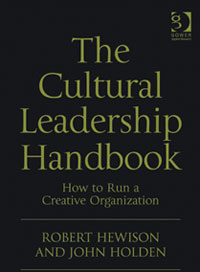 Hot off the press, The Cultural Leadership Handbook aims ambitiously “to be for anyone wanting to work, or already working, anywhere in the cultural sector, anywhere in the world (and)… to give you the edge that will enable you to show creative leadership of any level in a cultural organisation”.

As someone with an innate dislike of manuals and toolkits, preferring to learn and teach by example and by doing, I approached this book with trepidation. But my fears have proved unfounded, since it is remarkably readable. It knits together a very wide range of academic and theoretical sources in a digestible format and is mercifully free of figures, tables and management speak, using only those that illustrate practical points. The Handbook is very clearly structured around eight key challenges which read as a series of cleverly interlinked essays. It works its way from the first challenge, the realities of the current context, via leadership and values, to discursive sections on cultural value and creativity. The sixth and seventh challenges deal with practical issues around resources and skills, and the concluding chapter ends with a rousing call to action: “It’s time for you to take the lead.” Each section also contains a toolbox for dealing with the issues raised, exercises for the reader to engage with and suggested case studies to think about. The bibliography is extensive and, while some of the material has been around for quite a while, there is a freshness of tone and approach. I particularly liked the authors’ emphasis on the importance of cultural entrepreneurialism, which is so resonant for the times we live in: despite the upheavals of the past 18 months, there is still a surprising reluctance to embrace change and do things differently in some quarters.

On the negative side, the range of real life references is narrow, so much so I cannot envisage this being of relevance to everyone, everywhere. The focus here is on larger cultural institutions: the Royal Shakespeare Company is a constant, and the book is peppered with examples derived from the British Library, English National Opera, The Sage Gateshead, the Royal National Theatre and institutions such as The Kennedy Centre in the USA. You have to delve pretty deeply to find more diverse reference points – Art Angel, Akram Khan, Bolton Museums and “a small individual museum” are in there if you look carefully – and it would seem that volunteer-led or disability-led organisations are out of this particular loop. I also question the usefulness of the open-ended exercises and case studies, the objectives of which are often unclear and which would only support a limited range of learning styles.

So, while I don’t think it fulfils its ambitious claim, I would commend it to people who are working for middle- to larger-scale organisations in the UK, who are or want to be on their way up the career ladder. It will also serve as a useful refresher for those of us who’ve been around some of these particular blocks – or should I say challenges – before.