When Regional Cultural Consortia were originally set up, they were viewed by some as yet another layer of bureaucracy and just an opportunity for talking but with little influence, no teeth and a need to prove themselves to a suspicious constituency. Some two years into their lives, they are now under review, but Alan Humberstone believes that the review should be a positive defence of what is achieved, and that there is no need to be defensive.
The emergence of the regional agenda in England has given an impetus to getting a coherent voice for the cultural sector in the regions and making sure that the key regional bodies take the sector seriously. One of the strengths of Regional Cultural Consortia (RCCs) is the smallness of their being, and their desire to work collaboratively and not be seen as taking over anything or anybody.They have forged strong links with their constituencies, partners and stakeholders, and their role is to look at the issues which cut across a diverse range of agencies and see how they might be addressed in a coherent way.Two regional bodies, along with the Government Offices for the regions, have emerged over the last few years with pivotal roles - the Regional Assemblies and the Regional Development Agencies (RDAs).The roles, aspirations and strategic directions of these bodies differ within each region.The aspiration of the different Regional Assemblies within each of the English regions, for example, means that they operate in widely differing ways, from co-ordinating bodies to putative Regional Governments. 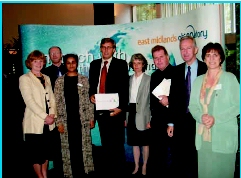 One of the few initial tasks asked of each RCC was the production of a Regional Cultural Strategy. As with many tasks of this type, the process was probably as important as the end result; but the resulting documents, which have now emerged from all the RCCs, have shown both the regional distinctiveness we all know exists and also give a flavour of the identity each region aspires to.The East Midlands Cultural Consortium launched its regional cultural strategy ?Time for Culture? at an Assembly meeting, and the Assembly agreed to formally ask the Secretary of State that the RCC should become part of the official task group structure, fully integrated into the process which has been set up to deliver its development plan, known as the Integrated Regional Strategy.

Equally, relationships with RDAs are critical, and not just for economic reasons. Recent policy changes relating to the integration of social capital within the policy framework means that the cultural sector is growing in importance among the RDAs? priorities, and many already have cultural activities as key elements within their strategic plans. For example, there are major initiatives for creative industries, tourism and sport within the East Midlands RDA plan; but often the nature of the cultural sector workforce and the lack of reasoned cross-sector economic arguments about the value of cultural activity mean that there is a role for an overarching body such as an RCC to bring coherent arguments to bear. East Midlands Cultural Consortium, for example, is discussing the provision of training across the sectors and looking into the issue of volunteering ? a key feature of so many cultural activities. But its role is not helped by the relative lack of statistics and coherent baseline data about the sector and the urgent need to review systems that record employment.

RCCs also have another important role potentially within local authorities? cultural planning processes.The development of local authority strategies which are complementary to the Regional Cultural Strategy has brought many benefits including plans which are developed jointly by counties and their district authorities, and plans for urban conurbations which look across local authority boundaries.

I would argue that the case for RCCs has already been demonstrated, and if they do not survive the review something similar will have to emerge.