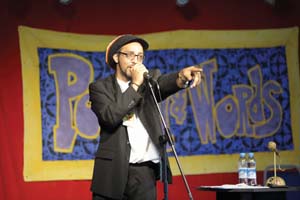 Contemporary poetry is thriving, yet typically characterised as difficult and in decline. It faces a battle between widening access and maintaining quality while avoiding accusations of both elitism and dumbing down. Poetry is also seriously underfunded – Arts Council England (ACE) provided funds in 2009/10 of around £3m, just 0.79% of its total cultural spend. But poetry is fluid, flexible and perhaps better placed to adapt quickly in times of austerity, something its advocates know only too well.

There are currently around 60 publishers registered with the Poetry Book Society in the UK, and a further 68 publishers of poetry pamphlets. Faber&Faber, the biggest name in poetry publishing, take on only one or two new poets a year, yet a new generation of poets are finding new ways to get published and make their voices heard. The Internet has done a lot to widen access and level the playing field amongst emerging poets: the Poetry Society’s 2009 National Poetry Competition, for instance, saw a 45% increase in entries on 2008. From poetry slams to intensive creative writing courses to poetry tents at festivals, there are myriad ways to engage with poetry.

IDENTITY CRISIS
That said, poetry’s national bodies still seem to feel the need to be advocates, salesmen, promoters, advisors, publishers and more. Chris Holifield, Director of the Poetry Book Society (PBS) told AP that she would “like to cover everything… the whole spectrum”, but simply cannot support everything and everyone. But the way we view, read and consume is changing, and whether traditional poetry publishing is forced to change in the face of new literary presses, magazines and blogs remains to be seen.
Tom Chivers, whose own organisation, Penned in the Margins, “does books, events, tours, and is an agent for poetry and poetry performance”, is blunt – poetry book sales are poor. He is also pragmatic: “the notion of a niche audience doesn’t mean there isn’t one, it just has to be found. The Internet helps with that”. The importance of the Internet is largely considered key to the current popularity of poetry, opening as it does the floodgates to would-be and established poets, fans, and audiences in far- flung corners of the world. Opinions differ on whether the drive for a bigger audience and a wider reach should be a priority, but Chivers is a fan: “There are recognisable trends towards openness... there is a new generation of writers who have a more open approach.” But while the Internet gives everyone the chance to be a poet, to publish their work and to share it – breaking down some of the barriers associated with traditional publishing – it does raise concerns about the quality of work.

ADAPT AND EVOLVE
Naomi Jaffa, Director of the Poetry Trust, describes her organisation as “a sort of quality standard for poetry”. It would be easy to subscribe to Jaffa’s potentially alienating view that “poetry is a minority game”, and leave it at that. But that makes poetry and poets vulnerable to charges of elitism – and rightly so. The work that many organisations are doing to open poetry to more people is important, and not to be undervalued. Jo Bell, Director of National Poetry Day, strongly believes that the future of poetry lies in “heading for a wider audience - and a broader range of voices”. However, she acknowledges that “online and self-published writing can sometimes be mediocre,” which makes it “harder for the audience to identify quality”.
Holifield, who says she is delighted that smaller presses are springing up, whose organisation supports the Michael Marks Award for pamphlets, and who praises the vibrancy of small publishers, admits that quality control is “a really big problem”. It’s a tense balancing act – and one that all poetry organisations must try to get right. The Poetry Trust, for example, maintains it is “obsessed about the quality presentation of poetry”, but this year, ran a scheme to have a poet in residence at Wimbledon which involved Matt Harvey writing a poem a day for the duration of the tournament. The pace was highly unlikely to produce quality, but it did bring a much wider audience to poetry not only because, as Jaffa puts it, Harvey writes poems “of a particular accessibility and wit”.
The PBS is determined to make use of this public enthusiasm and believes the Internet can still “bring people in, rather than dismiss [poetry] for dumbing down”. It is true that a number of contemporary poets, including Geoffrey Hill who is shortlisted to be the next Oxford Professor of Poetry, have little interest in being accessible, in speaking to the masses. But this leaves the marketing of poetry for young people to be confined to performance poetry, the spoken word or the analysis of song lyrics. Bell believes that new audiences are often patronised: “Poetry doesn't have to 'dumb down' because most people aren't dumb. But it does have to be put in front of them in a non-intimidating, attractive format that they actually want to pick up... Almost any poem can be understood and enjoyed by almost any audience: but most folk won't pick up a poetry journal or find their own way.” Judith Palmer, Director of the Poetry Society, also points out that “the growth of poetry events at festivals has played a significant role in re-establishing poetry as a non-threatening part of everyday cultural experience”.

NEITHER QUALITY NOR QUANTITY
The first entry point for many is through school. Yet, amongst all those who spoke to AP, there is universal criticism of poetry education. Chivers highlights “problems with the systemisation of poetry in schools. Poetry [is seen] as something to be revealed rather than enjoyed.” American poet Billy Collins writes of the temptation students feel to “tie the poem to a chair with a rope and torture a confession out of it”. Similar problems can be observed within classical music and opera education, but just as with music, when you find something that you like, something that speaks to you, it suddenly makes sense. Bell believes that “most teachers do not feel confident with poetry, particularly contemporary poetry”, and consequently, National Poetry Day provides lesson plans, which have proved popular. Holifield thinks that “teaching in an analytical way takes the fun out of it”. She goes further, drawing attention to the sheer paucity of children’s poetry. It is almost impossible to get new poetry for children published, and schools simply don’t have enough books.
Chris Gribble, Chief Executive of the Writers Centre Norwich (WCN) is particularly vocal on what he feels is “incredibly patchy teaching”. He is scathing about current provision: “Every teacher [who specialises in literature] ends up with around four to six hours on teaching poetry during the whole of their PGCE.” For Gribble, technology and the Internet are at least part of the answer: the current curriculum is too proscriptive and he thinks that new technology should be used more in the classroom – Wikis, audioboos, video links, texts can all be used, for example to help invigorate the form and allow pupils to experiment. Gribble is certain when it comes to the uptake of poetry with young adults “contemporary teaching methods are at fault, not poetry”.

HAND TO MOUTH
But why become a poet? Jaffa states (and others say time and time again): “No-one is in poetry to make money.” But, surely, for poetry to flourish, money has to come from somewhere? Well, yes and no. Chivers is emphatic that he “never wants to become anything regularly funded”, as it would restrict his ability to remain “extremely fluid”. He is privileged to have this freedom, but other organisations struggle with a desire to balance flexibility with the clearly defined mission necessary to receive funding. Hollifield is keen to point out that “poetry really can’t look after itself. If the funding isn’t there it won’t happen,” and that for very little financial input, poetry is “good value for money”. Chivers suggests that poetry is “the poor man of the arts” – and this is not a comfortable place to be, while Russell Thompson (of performance poetry organisation Apples and Snakes), is emphatic that poetry “is an artform that flourishes under adversity”.
Many of the organisations that AP spoke to are feeling the strain as they try and support every kind of poetry, while maintaining integrity and not spreading themselves too thin. As Jaffa says, poetry gets “the smallest sliver of the tiniest slice of the [arts] funding cake”, but she is pragmatic because, as she says, “twas ever thus”.

FOR WHOM THE BELL TOLLS?
Bell points out that poetry is “the cheapest of all artforms to produce. All you need is a pen and a piece of paper, a free blog or a low-cost magazine, a community venue like a library, an open mic.” As she recognises, “At grass roots level, new poets will continue to emerge.” She is concerned, however, that “for mid-career writers, there will definitely be a diminution of opportunity. We all fear that we are in for a time of creative smelting, and that only the finest metal may be able to stand the heat; but poetry is better placed than, say sculpture or opera to thrive in a time of austerity.”
When asked if he’s worried about the cuts, Gribble is measured. The WCN, which is currently regularly funded by ACE, by Norfolk Council and Norwich Council, and by the University of East Anglia is vulnerable to the cuts laid out by the Spending Review. “We’re concerned,” he admits, “but we’re working really hard to plan ahead.” Gribble is keen to emphasise the opportunities that change will bring and he praises ACE’s support – which he believes wholly supports the poetry ecology. In terms of the cuts themselves, Gribble pulls no punches: “Get over it… everyone’s got to make changes, but poetry’s not going anywhere. We haven’t got buildings to close and we haven’t got public spaces to go dark – this is good and bad: it keeps us vital and lean, but also means that we get less attention when we are suffering.”

Eleanor Turney is Editorial Co-ordinator for ArtsProfessional.
W http://www.artsprofessional.co.uk
This week Eleanor saw ‘Faust’ at the Young Vic, ‘Radamisto’ at the Coliseum, ‘Vertical Road’ at Sadler’s Wells and ‘The Misanthrope’ at Bristol Old Vic. Sadly, this was not a typical week, but a good one! She was also reminded how gobsmackingly good Don Paterson's 'Rain' is.