Angels on a pinhead

From making crucial funding decisions to challenging the cultural status quo, Mark Robinson looks back on the lessons he learnt from the past ten years with Arts Council England. 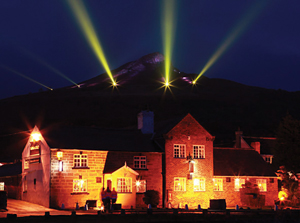 In my last few months at Arts Council England (ACE), I found myself reflecting a lot on this quotation, from CS ‘Buzz’ Hollings, one of the foremost thinkers about sustainability and resilience:
“We recognise that the seeming paradox of change and stability inherent in evolving systems is the essence of sustainable futures. We now know that to counteract the current pathology we need policies that are dynamic and evolutionary. We need policies that expect results that are inherently uncertain and explicitly address that uncertainty through active probing, monitoring and response. However, we cannot successfully implement these new policies because we have not learned the politics and we ignore the public.”

But rather than run you through the lessons and highlights of my ten years at Northern Arts and ACE, I want to look at that paragraph as a way of what I learnt within the funding system. (Hollings isn’t talking about the arts, but he could have been.)
Balancing the tension between change and stability was a constant theme of the past ten years. This is most obvious when funding decisions are made, but those decisions are shaped by bigger changes, and longer continuities, than they seem.
In the North East, that balance has been necessary to create a sustainable infrastructure for the arts whilst responding to the new – involving huge lottery investment, but also major revenue commitments and development of organisations and networks within the region.

MAKING FUNDING DECISIONS
This infrastructure comes at a cost though, and some people which had long received Arts Council funding no longer do so. Those decisions have taken many hours of my life, but they were the right ones to be spending time on. (Would I claim every single one was 100% correct, given hindsight? No, but I’d change some we funded at times as well as some we didn’t.) The fundamental lesson from this is that the health of the whole arts ecology needs to be paramount, rather than every individual bit. This needs far greater, and clearer, explicit acknowledgment by both funders and those seeking funding.
Sustainability demands, though, that things do not get ‘locked up’ and that policies change in response to the world. The distinction between ‘dynamic and evolutionary’ and ‘what new priorities are they going to dump on us now’ can be moot. For me this comes down to a basic muddle on all sides around arts funding. Do you get it because you ‘need’ it to do what you do – i.e. have a grant-sized gap in your income – or do you get it as a reward for being great at what you do and might do more with a grant?
There is not enough clarity on either side about what the money is doing – prize, investment to build a business or funding to part-buy activity. I’ve seen exciting new organisations, working hard because they had no regular funding, become both dependent and dull very quickly when regularly funded organisation (RFO) status came along. Others have used it brilliantly, and equally others without have continued to thrive by providing real value to their customers.
The results are, as Hollings says, uncertain. It is sometimes about taking a punt. Some stocks will fall before they rise. (I seem to recall once suggesting an ACE RFO version of the Stock Market but you can take transparency too far, apparently.) Our broader culture does not encourage risk-taking amongst decision-makers. Every withdrawal is seen as an affront, it feels, whilst each new investment has to be a guaranteed success by the next spending round. This culture then spreads throughout the system, leading to the peculiar directive things I’m told some ACE officers ask clients, and to general co-dependency.

BREAKING A VICIOUS CYCLE
At the heart of this is a failure of communication around ‘probing, monitoring and response’. ACE is not always good at asking the right questions, or using what a life coach might call active listening when answered, but then neither is the sector as a whole. There is too much wishful thinking, and not enough consideration of objective reality. This adds up to an arts culture which does not always learn from its own practice. There are some outstanding examples that do, really exciting learning, ever-changing, organisations, but not enough.
At the recent State of the Arts conference I was reminded of how much insularity and lack of self-awareness I see and hear in the sector. From my role I tried to open that up, but it was hard, and my position as ‘a funder’ was part of the problem. (My Arts Counselling blog was a response to this.) Whilst some arts people welcome this, others seemed to prefer an oppositional, ‘just tell us what you want us to do and we’ll tell you we’re doing it’, approach. I’ll be interested to see how different the reactions are now I don’t come with a position attached.
Hollings’ final sentence is about politics and the public. I touched on politics earlier, in relation to risk and failure. We must acknowledge the politics of the choices arts funders can make. Understanding the politics has been key to my work in the Arts Council – not just politician-politics of course, but regional, business, artistic and (very occasionally!) internal. Perhaps I’ve been more able to combine that with my passion for the arts because I’ve always seen the arts as bound up in politics and society. I believe our role is at the heart of national life, with all the difficult conflicts that brings, not in some pure, but tiny, playground in the corner. You have to live with decisions you wish you didn’t have to make, but are right: but that’s just part of being a grown- up human in this world.
The public are the last words of that quote, and where I believe whatever value we make in the arts ultimately resides. (Collectors can keep their fortunes!) Not necessarily in every single person all the time – but in that national life, in how people perceive the world, in the opportunities opened up for young people or, actually everyone. An artist needn’t think of the public when making art – I know I don’t when writing my poems – but when you take public money the deal changes in subtle ways. And the public will take its own view of you and the arts in general. One of the changes I’m most pleased about within ACE is the greater emphasis on engagement that’s been achieved, and the wider support for that. Again, it feels like a fundamental choice to me: in the tiny, bejewelled playground or in the wide, dirty and difficult world. You can go where you want, but public funding is for the world.
IMPACT AND RESILIENCE
Of course, change and stability are also personal themes for me, right now. I personally changed a huge amount in a decade, and feel I have a much deeper and mature understanding of how the arts ecology can impact on society, and how it needs to operate to do that. But I have also deepened my fundamental belief that artistic expression can help make a fairer, more beautiful and richer world. That means the making of art as well as the enjoying of it, as it is the processes of making and understanding, shaping, choosing, finding, failing, sharing, reassessing that create any impact art has, not just the appreciation of ‘greatness’ – or so I believe.
I hope I didn’t lose the ‘outsider’ qualities some would say I brought to my roles. When I joined Northern Arts in 2000, as Head of Film, Media and Literature, it was seen by some friends of mine as very much ‘poacher turned gamekeeper’. I kept writing, although have had to publish poems either in anthologies or abroad mainly, due to the conflicts of interest likely to occur with most poetry publishers. I’ve not published a full collection since 1998, but am ‘big in Bulgaria’ due to an ongoing translation collaboration with poets there. Who knows, maybe those qualities also showed themselves around the Executive Board table. But I definitely learned a huge amount about management, leadership, and organisational development, which I can now share in other ways.
I believe there are two key things the sector needs to increase: its impact and its resilience. One of the last things I did for ACE was research a report into how best it could help organisations build their resilience. I will be taking many of these ideas forward in my company Thinking Practice, working with organisations of all shapes and sizes. This will continue, and hopefully take further, the odd combination of skills and practices I brought to the Arts Council: data, strategic analysis and planning, facilitation and coaching, learning. And poetry, of course.

Multiply leadership, not leaders
Building resilience
Experiences of excellence
New ACE strategy: Keep calm and carry on…
The business case for diversity in building adaptive resilience
The evolving truth
Angels on a pinhead