Where did the site-specific idea come from? And can an artist ever really know how it will turn out? Gillian McIver traces its emergence and looks forward to future developments. 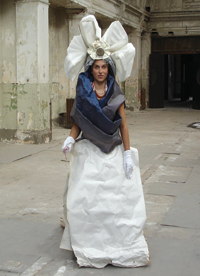 When I first started to work with site-specific art in the mid 1990s it was seen as relatively unusual, even anti-institutional, despite being around since at least the 1960s. Attitudes changed as more and more projects were developed, and the practice attracted some serious critical writing, notably Miwon Kwon’s ‘One Place After Another’. Initially, site-specific art was associated with large-scale installation practices, particularly land art. From the late 1980s, artists began to leave the established institutions to resite their art works in other spaces. In many cases this simply reflected the lack of opportunity to exhibit in galleries, so makeshift galleries were set up. Others took an interest in these sites, working with the interaction between site and artwork as part of the process of making.

Legitimisation of the practice of urban site-specificity came when, in the late 1990s, producing organisations managed to attract established artists and significant funding to make large-scale projects that attracted media attention. In the UK, the key organisation is undoubtedly London’s Artangel, which has commissioned more than 70 projects since 1992. While Artangel’s productions are not always site-specific, many of them are and most do not occupy established art venues but are presented in unusual sites. Although it is the pre-eminent agency of its kind in the UK, Artangel tends to work with established artists who are not necessarily known for working the site-specific or site-responsive vein. It is not clear that site-specificity is even a particular aim for Artangel. Another pioneering approach is that of Champ Libre, in Montreal. Champ Libre was founded in 1992 as a hybrid arts organisation and research laboratory. It produces in situ events that connect current practices in contemporary art to issues in architecture and urban planning, with a focus on art and media technologies. Recent sites used include a decommissioned incinerator, an operative building site, and pavilions in a rebuilt central business district.

ARISTS FOR ART’S SAKE
However, it is artist-run organisations and individual artists that more often lead the way in pursuing site-specific art as a way of developing installation, media art, theatre, performance, mural painting, etc. The engagement occurs when the artist is actively involved with the site as part of the process in actually making the work. It goes much further than placing art in unusual places: it is about working with the total environment of a site. This process has a direct relationship to the art works made, in terms of form, materials, concept, etc. In ‘Titanic HQ’, a project that Luna Nera made in a former shipyard in Belfast, found materials were used to create large-scale paintings, costumes for performance and projection screens. In ‘The Derelict Sensation’, in Gilbert Scott’s Midland Grand hotel, it was the Victorian dereliction itself that was celebrated, on the eve of the structure’s renovation into once again becoming a
luxury hotel.
Aside from the expected problems of health and safety and permissions, one of the typical issues concerning arts managers who want to engage with site-responsive work is that it does not lend itself easily to proposals. Part of the fascinating nature of this kind of work, what creates its energy and appeal, is that it must be open to spontaneity and change. Once the groundwork has been done (basic methods established, basic materials sourced) the actual making must be sensitive and capable of responding to new discoveries about the site, newly revealed stories and, quite often, unexpected difficulties. The artist simply cannot be fully in control of the situation. Damp can suddenly warp a work – or transform it into a new shape. Flexibility is essential, though on paper it may seem like imprecision. These are challenges for arts professionals: from experience, I believe that the most crucial indications of probable success are the artist’s commitment to the research process, and the quality of completed site-specific projects, rather than employing a well-known artist.

GROWING TREND
The past half-decade has seen a growth in site-based work. The reasons are twofold: firstly, the increased institutionalisation of public space means that there is a desire by artists to intervene, to contest, to make something personal and active. Secondly, there is a growing consciousness of the post-industrial state we live in. Everywhere we look, the old structures that bound social existence (such as factories, libraries, hospitals and schools) have been abandoned, turned into flats or razed for shopping developments. Working site-specifically reflects a sense of rootlessness and dislocation shared by the community at large. Bringing people together to occupy a fleetingly shared space – mediated through art – has the potential to initiate important dialogues, and re-establish a sense of common ownership of the territory. In this way, site-responsive work can speak to audiences, and indeed reach new audiences. The territory itself attracts the public. Once inside, they have the opportunity to encounter art – sometimes for the first time. This curiosity makes marketing the work less difficult than might be expected. The current danger for the artform is that, in the hunger to find any space to mount an art event, too many projects are being labelled “site-specific” when they are anything but. Without a clear engagement between art and site, the energy is lost, and audiences drift away.

Gillian McIver is an artist and curator, and Co-Founder of Luna Nera.
W http://www.luna-nera.com; http://www.artsite.org.uk

This week Gillian was enthralled by ‘The House of Fairy Tales’ at Viktor Wynd Fine Art, watched ‘The Night of Counting the Years’ by Shady Abd Al Salam, and read Robert Hughes’s biography of Goya.