I often hate going to the theatre and suffering all the ritualised packaging of the creative moment in a confined space. The experience can make even bad street art appear to have more power and meaning than the best of theatre. Combative talk, I know, from someone working within the arts, but I am passionate that auditorium-based theatre is only one part of the dramatic rhetoric, says Paul Ackerley.
I suppose the core of my resistance is that the artists rarely have free reign over how to use theatres, whereas street art performs in the spaces where we all live, work and play. It?s not just a question of staging theatrical productions out of doors ? not only is street art a different experience, prompting us to engage in a completely new relationship, it?s a different animal that breaches cultural barriers and transcends language limitations. Abroad especially, where there isn?t the same imperative to appease the bland sensibilities of many local authority promoters, street art is used as a powerful tool for discourse and debate on urban renewal. 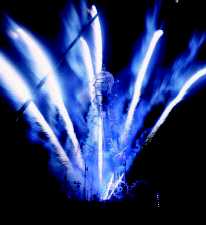 I?ve been fortunate to have seen much of the best international work, and also to be at the vibrant heart of the south east?s increasingly pioneering street arts scene. On a single weekend in May last year, 150,000 people went to outdoor theatre performances as part of Streets of Brighton. Now in its fifth year, Streets of Brighton has generated £1m worth of street arts from an investment of £400,000. Improbable Theatre Company?s ?Sticky 2?, co-commissioned by South East Arts (SEA) and premiered last year at Preston Park, set a new standard of achievement for a UK company, not only winning enormous respect from French producers who saw it but also being immediately snapped up by a visiting Australian producer.

Despite my opening words, street arts offer diversity and scale that complement building-based artforms, and this is where the French concept of shared Creation Centres can point the way ahead. Put simply, they are managed accessible spaces where artists make art. Artist-led rather than community-driven, the centres are managed and directed by street artists and companies producing their own work. The space allows artists to conceive, create, construct and rehearse technical and scenic elements of their shows, and is open to observers, students and other artists. SEA is commissioning a regional Creation Centre feasibility study this spring. Why should artists and audiences only be able to meet at the end of the production chain around a ready-to-consume pre-packaged product within a purpose-built venue with its associated codes and rituals?