Bridget Edwards marvels at the work of arts professionals who help offenders to learn how to learn. 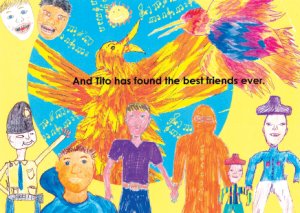 I recently visited our ‘ Learning to Learn’ (L2L) project at HMP Rochester where a group of ten young men worked together to plan and produce an 8ft by 6ft mixed media artwork. The process took them through from warm-up exercises, such as mark making, to draft sketches, to drawing to scale and producing the finished artwork. As the current batch of projects are evaluated, findings so far confirm what the converted already know – that the arts facilitate learning that helps develop ‘soft skills’. There’s nothing ‘soft’ about being able to work as part of a team, listening to others, making space for someone else’s ideas, articulating yours, demonstrating patience and controlling your temper. Anyone who’s ever curated by committee knows exactly what I mean. Learning to Learn is one of those projects that inspire you to keep plugging away at getting the Government to embrace arts-based interventions as part of an offender’s rehabilitation programme

Statistics reveal just how many people in prison are severely disadvantaged as a result of their lack of education and basic skills: 33% of prisoners are unable to read; 50% cannot write; 40% of juvenile offenders are innumerate; 52% of prisoners have dyslexia compared to just 5–10% of the general population. Surveys directly relate offending to the lack or absence of basic skills such as literacy and numeracy. Prison education departments work hard on limited budgets to help prisoners achieve these. However, it is now widely recognised that we all learn differently. Some of us learn aurally, others need visual stimulus, and others still, a more kinetic, hands-on approach. It is also known that there are at least three prerequisites to being in a position to be able to learn at all: self-motivation, self-esteem and trust.

The 80% of prisoners who did not enjoy school are unlikely to respond positively to another formal classroom setting and traditional teaching. L2L offers a new way of teaching and learning basic, key and life skills through creative, practical and supportive engagement. Participants learn by seeing, doing, experimenting and working as a team. In this way the classroom setting is transformed into a dynamic and interactive environment in which each individual can feel they have a vital role to play within the whole group. L2L is a personal development programme engaging offenders in group arts projects. Through the project, participants gain confidence and a sense of achievement, develop communications and team work skills. They also gain accredited learning qualifications in life skills, which can help them gain employment after release.  [[I am full of admiration for the arts professionals who’ve chosen to work in this difficult and challenging sector]]

L2L focuses primarily on visual arts, though the project often runs combined arts activities, such as printmaking with creative writing, or painting and dance. Visual arts lends itself well to interactive group work, as individuals are engaged in discussion, decision making, compromise, supporting each other and celebrating group achievement. At the same time it is a powerful tool for personal reflection, as has been shown through the positive impact on prisoners who paint and draw in their cells. I am full of admiration for the arts professionals who’ve chosen to work in this difficult and challenging sector, working within a criminal justice system that has yet to make up its mind whether it’s there to punish a man or to help re-habilitate him. As I listened to some of the young offenders talking us through their workshop process, explaining the images and the philosophy behind them with thought and humour, I again found myself asking how on earth they came to be locked up. One Head of Education’s answer is that it’s simply “wrong place, wrong time, wrong responses”. If you were to meet some of the group who produced the children’s book ‘Tito’ at HMP High Down, you would agree.

“The course gave me more confidence in myself. It gave me the confidence to stand up and do something that I thought that I would not be able to do... and maybe I won't be as scared to take a chance on the outside with my new confidence.” Society couldn’t ask for more from an individual – could we? 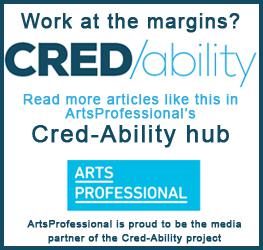 Learning curve
The fight for recognition