?What?s My Name?? is an ongoing arts project using creative play and storytelling with pre-school children and their parents or carers, explain Peter Evans and Nicola Hemstock.
The project aims to encourage both children and adults to recognise and become familiar with computers as creative tools rather than simply work tools. In addition, the project aims to encourage parents to recognise and develop their roles as the ?first educators? of their children. 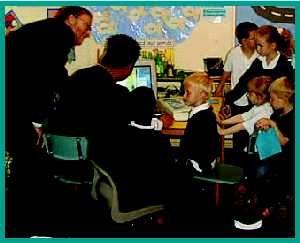 The project is part of a Jubilee Arts UK-Online Centre with programme funding from the New Opportunities Fund, Community Access to Lifelong Learning. So far, the project has been delivered at a local nursery and with two reception classes at a local primary school ? a total of 72 children and 25 adults.

The workshops have involved traditional creative play ? naming games, nursery rhymes, imaginary toy boxes, mask and puppet-making workshops, and creating colourful name badges and flower pot hands using cardboard cut-outs of each person?s hands ?planted? into a paper-cup flower pot. One young girl was disappointed that despite regular watering, the hand flower had refused to grow even an inch by the following week ? she couldn?t wait for it to bloom!

Other creative activities introduced the children and adults to digital equipment ? scanners, digital still and video cameras and computers. The project participants scanned the masks, puppets and name badges they had made, into the computers. Everyone was shown how to use the digital still and video cameras and encouraged to take pictures of each other, talk about workshop activities to the video camera and film each other during the workshops, during break times or simply messing about. The key factor in encouraging the children and adults was to reassure them that this sort of digital kit was not highly expensive, precious and delicate, and in particular, that it could cope with the rough and tumble of being handled by lots of three and four year olds (and so far nothing has been broken!). What this work showed us was the importance of overcoming the ?don?t touch that, you?ll break it? syndrome. Once the children and adults saw that they could touch it and it wouldn?t break, they became much more relaxed and enjoyed using the equipment.

A particularly successful game was creating a short story with the children using the What?s My Name? chat room. A computer at the nursery or school was linked to the chat room and the children helped to write a story started by someone at the Jubilee Arts offices. Parents were on hand to help the children key in their bits of the story. The children had an amazing capacity to come up with the most unexpected and creative twists to any storyline. This activity created the most sustained engagement by the children with the computers throughout the workshop sessions. The stories formed the core of the final storybooks recording all their activities during the workshops, and were developed by a commissioned artist and presented to each group.

The project will continue over the next year with pre-school groups across Sandwell in the West Midlands, exploring new ways of delivering the project, seeking closer engagement with parents and carers and seeking ways to sustain the activities once the workshops have finished. A key aim of the project for us has been to pilot project work to inform programme planning for a Family Learning Centre. Due to open in 2004, the centre will be a five-storey, 10,000 square metre landmark building designed by Stirling Prize 2000 winners, Alsop Architects. The development of the centre is supported by the Arts Council of England National Lottery and Sandwell Metropolitan Borough Council and will run in partnership with the local education authority supporting creative learning activities for children and their parents/carers.