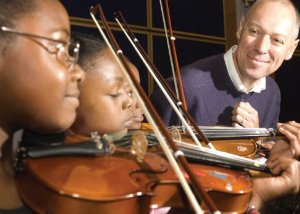 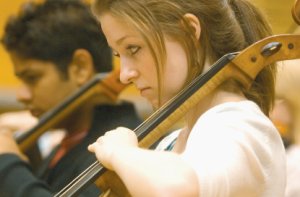 “This means so much to us and makes such a difference to the children.” This was the beginning of a conversation with a primary school teacher at the CBSO Centre in Birmingham only a few days ago. The occasion was a sharing day at the end of a creative project based on Holst’s Planets Suite. The participants from eight Birmingham schools had been to Symphony Hall to hear the music performed at the beginning of term. The teachers had had the benefit of a training day led by experienced City of Birmingham Symphony Orchestra (CBSO) musicians, and a curriculum support pack to help them develop related activities in the classroom.

A team of musicians, with artists from other artforms, had then spent the first half of term visiting each of the schools to develop creative pieces of music, drama, dance and visual arts inspired by the planets theme. My teacher colleague had clearly been moved by the achievements of her children, and, not for the first time, had recognised the very considerable added value of working in partnership with professional artists.

Orchestras throughout the UK are working with schools in similar ways. In over two decades professional orchestras’ interest in engaging directly with children and young people has developed to the point where every orchestra has dedicated staff to manage this work. The core of the work is based on three very simple principles:
• Experiencing quality live performances
• Supporting young musicians, and
• Developing children’s creative skills.
Over 60 members of the Association of British Orchestras, including everything from full-size symphony orchestras to small specialist ensembles, devote time and expertise to this fast-developing and critical area of music education.

Recently an alliance of eight publicly funded English symphony orchestras pledged to “perform live for every child during their time in school”. According to research recently commissioned from Pauline Tambling into the viability of this pledge, these orchestras already provide nearly 100,000 tickets for daytime schools’ concerts in arts venues around the country. Add to this the hundreds of regular creative projects and other support activities run and managed by orchestras, and a picture emerges of very considerable investment in the education sector. In 2006/07 the CBSO worked with almost 36,000 participants in its education programme across Birmingham and the West Midlands. This represented the direct involvement of approximately 75% of the CBSO’s orchestral musicians plus other artists and animateurs, and an investment of over £250,000.

Contrary to some cynical opinion about the motives of the professional orchestral sector, much of this work takes place in areas of inner city and rural social deprivation. Many orchestras concentrate parts of their programme on working with young people with special educational needs. Strong working relationships have been created between musicians and education professionals, enabling sustained programmes of work to develop over time, to the lasting benefit of many thousands of young people.

What is more, this work has started to influence policy makers in the formal education sector. The Music Manifesto is the result of a unique collaboration between the DCMS and the then DfES (now DCSF), and has had remarkable success in its short history. Just two indicators of this success have been raising the profile of music education through a relentless campaign to realise its five key aims and brokering connections with the Government that have resulted in unprecedented levels of new funding. For example, the Hallé Orchestra is nearing completion of a three-year Pathfinder project in partnership with Manchester Music Service, Salford Music and Performing Arts Service and the Greater Manchester Music Action Zone – just one way in which the Music Manifesto has successfully brokered links between the formal and non-formal sectors.

Following the announcement in November 2007 of £332m funding for music education, the Children’s Secretary Ed Balls said, “I want all young people to have the chance to both experience and take part in creative activities to help them learn and develop.” The recent Cultural Entitlement Offer of £25m designed to allow children to take part in a wide range of activities including music has attracted the inevitable contentious commentary, but the overall picture is one of positive realisation that music matters.

In 2007 the National Association of Music Educators (NAME), the main subject association for individual music educators, launched its latest publication, ‘Ways Into Music: Making Every Child’s Music Matter’. With a title borrowed from the Music Manifesto Report No.2, the publication’s starting point was that “everyone is musical and has the capacity to express themselves through music”.

NAME recognises the need for teachers, advisers, inspectors, lecturers, community musicians, orchestral education managers – in fact anyone bringing music to children and young people – to network as a community. Through conferences, publications and an increasing on-line resource, NAME has gained respect and a reputation for the quality of the support it gives to music educators. NAME has also sought to recognise the diversity of music-making in schools today. This not only reflects the changing demographic in many parts of the country, but also the UK’s rich heritage of music-making.

Orchestral education programmes are often accused of focusing narrowly on classical music. But orchestral musicians frequently collaborate with musicians from other genres and engage with the music that is most significant for young people. Quizzed about this in a radio interview about a Schidlof String Quartet project in a comprehensive school, I retorted that it wasn’t so much about the style of music but the quality of music making that mattered. Young people are amazingly open-minded about music but reassuringly critical where quality is concerned. The involvement of professional musicians from whatever background working in partnership with well-trained and committed teachers is central to raising the quality of music-making with young people.

One could paint an over-optimistic picture of music in schools today. Of course there are inconsistencies between different areas of the country, and there are those schools that have yet to fully embrace the plethora of wonderful opportunities that currently exist. There are issues of over-testing and curriculum restrictions, of opening up the choices for young people and of giving every young person a musical legacy for the rest of their life. But, collectively, we are getting there.

Keith Stubbs is the Education and Projects Manager at the CBSO and the current chair of the National Association of Music Educators.
w: http://www.cbso.co.uk; http://www.name.org.uk