Though the arts world likes to think of itself as progressive, open-minded, forward-looking, this is not the experience of many people trying to join and succeed in the profession. Charlotte Jones explores the range of employment barriers facing those who work in the sector.
At the Theatre 2001 conference earlier this year, Anthony Corriette, Development Manager at Theatre Royal Stratford East, drew attention to Theatre?s continued failure to attract a culturally diverse range of people into the profession and to offer genuine career progression to them. He said ?The theatre industry must come to terms with the stark reality that it is institutionally prejudiced, racist and sexist and implicit in that are all the other isms and schisms.

This recognition is not a bad thing, it is merely the first step on the road to recovery. If we have this realisation however and do nothing to remedy it, then it is a bad thing? His sentiments were echoed at the Independent Theatre Council?s (ITC) launch of ?Disability - Policy into Practice? in November. Mat Fraser, an actor, said ?I insist that unless all British mainstream producing theatres, especially those that have received relatively recent access funding, start to use some of the many available professional disabled actors in a good percentage of their main house productions, that they must accept the following charge: that they are narrow minded, exclusive, elitist, right wing, cowardly, unimaginative, harbingers of artistic apartheid. They?re a large part of the problem, and unless they can become part of an inclusive solution, they should go.?

So from where do the problems stem? Discrimination in the workplace takes many forms - some direct and obvious others more subtle and indirect. It permeates the employment process at all stages:

The past three decades have seen a growing body of legislation attempting to prevent discrimination and a general acceptance amongst employers that ?having an equal opportunities policy is a good thing?. Progress is not happening fast enough however for the vast numbers of people still suffering intolerable discrimination on the grounds of gender, race, disability, sex, sexuality, age, class (to name but the obvious manifestations!).

Discrimination occurs as much as a result of inaction as from conscious action. 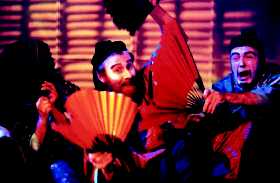 A body of legislation is relevant to the issue of discrimination:

Race: The Race Relations Act 1976 was passed to provide legal protection to people who have suffered or might suffer discrimination on the grounds of race.

Racial grounds means colour, race, nationality (including citizenship) and ethnic or national origins. The Act is meant to protect black and white people equally. The Commission for Racial Equality was set up with the statutory duties of eliminating racial discrimination and promoting equality of opportunity and good race relations. The Act identifies 3 types of discrimination:

Direct Discrimination ? treating a person, on racial grounds, less favourably than others are, or would be under similar circumstances.

Indirect Discrimination ? ?Structural discrimination? ? i.e. ?applying a requirement or condition which, although applied equally to people of all racial groups, is such that a considerably smaller proportion of a particular racial group can comply with it, and it cannot be shown to be justifiable on other than racial grounds?.

Victimisation ? The Act makes it illegal to victimise someone for having brought a complaint of racial discrimination.

Gender:
The law relating to workplace discrimination on the grounds of gender is governed by The Sex Discrimination Act 1975 (amended 1986) and the Equal Pay Act 1970 (amended 1984).The Acts protect men and women equally.

The SDA makes it unlawful to treat anyone, on the grounds of sex, less favourably than a person of the opposite sex would be treated in the same circumstances and applies the same provisions in relation to marital status.

Furthermore it makes employers liable for discriminatory acts committed by their employees during the course of their employment, whether or not they were done with the employer?s knowledge or approval. To protect against legal action an employer would have to show that they ?took such reasonable steps as were reasonably practicable to prevent the employee from doing that act.?

Disability:
The Disability Discrimination Act 1995 (DDA) makes it unlawful to discriminate against a disabled person in employment and the provision of goods and services. The employment provisions were implemented in 1996 and since then there have been over 5,000 claims of unlawful discrimination under the Act.

This part of the Act is designed to give disabled people a fair chance of securing and keeping a job and details rights in relation to recruitment and selection, terms and conditions, promotion, training and dismissal. It makes it unlawful for an employer to:

Fail to make reasonable adjustments where necessary (unless this failure can be justified).

Employers with fewer than 14 employees are currently exempt from the employment provisions of the DDA, but the government has pledged to remove the small employer?s exemption by 2004. In any case it is recommended good management practice to comply with the DDA whether or not the organisation is legally exempt.

The DDA abolished the Department of Employment registration scheme and instead defines disability as ?a physical, mental or sensory impairment which has a substantial and long-term adverse effect on the ability to carry out normal day-to-day activities?. Accompanying guidance to the Act includes people with a history of mental illness and people with impairment due to progressive illness (e.g. MS, HIV or cancer).

The DDA covers both employees and freelancers, both full- and part-time and regardless of length of service. The Disability Rights Commission has been set up to monitor and enforce the Act.

Discrimination not covered by Statute

Other sources of discrimination are beyond the scope of the law at present:

Sexuality:
Sexuality is an area of potential discrimination at work not currently covered by any specific legislation. In 1992 Stonewall (the lesbian and gay rights group) carried out a UK wide survey of 2,000 lesbians and gay men. Half said they had suffered harassment at work, a third knew or suspected that they had been discriminated against, two thirds felt unable to be open about their sexuality at work and one tenth reported being dismissed because of their sexuality. These findings indicate that discrimination on the grounds of sexuality is horrifyingly widespread and demonstrate a pressing need for statutory recognition and protection for the rights of gay men and lesbians.

Class and Age:
Discrimination is still rife of the grounds of class and age and currently no legal redress is available to someone who feels they have suffered discrimination on these grounds.

The EC adopted a new Directive (The Equal Treatment Directive) in November 2000, which forbids any type of discrimination in the work place on the grounds of sex, sexuality, religion, disability, age or race. The UK has 3 years to adopt the main provisions into domestic legislation. Currently it is enforceable against public bodies (?emanations of the state?).

Positive action (which is legal as opposed to positive discrimination, which is illegal under the Race and Sex Discrimination Acts) is required by organisations to promote genuine equality of opportunity.

It is insufficient to rely on the legal bottom line provided by the insufficient legislative framework or to limit action to the drafting of an Equal Opportunities Policy. The principles of the policy should lead to an Equal Opportunities Action Plan ? a range of agreed practical measures which the organisation can take to improve access, diversity, working conditions etc.

Taking action on Equal Opportunities does not have to cost a lot of money.

Much more can be achieved by changing attitudes and applying imagination. Here are a few examples of simple suggestions for positive action in recruitment:

Include in the advert phrases such as ?We value diversity and encourage applications form all sectors of society?, supply positive access information (e.g. ?our offices are wheelchair accessible?), and encourage job-share applicants.

Keep job descriptions simple and directly related to the tasks that have to be fulfilled by the job. Avoid jargon and subjective criteria.

When short-listing, separate personal details (e.g. name, education and work dates) from the main body of the application so that age, gender, race cannot be guessed.

Challenging discrimination, opening up the profession, reflecting the diversity of our modern society ? these are essential priorities for managers and practitioners if the arts is to be alive and relevant. We have to stop making excuses and start taking action.