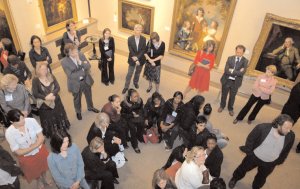 Sarah Levitt reveals how museumaker has encouraged arts and museum services to work together to commission new work and to obtain funding.

Until December 2006, Leicester City Council had separate arts and museums services, set within the cultural services division. In December I got a new title Head of Arts AND Museums. This is a reflection of a new attitude that is beginning to permeate regional arts bodies, thanks in part to the inspiration of museumaker, an ambitious partnership programme to develop new relationships, new work and new audiences for contemporary craft and museum collections.

Museumaker brought together three key agencies Arts Council England (ACE), East Midlands Museums, Libraries, and Archives Council and Renaissance, East Midlands to work collaboratively for the first time. Indeed, this is the first time that there has been such a strong and strategic alliance between ACE and museums in the regions. So museumaker not only proved invaluable in terms of forging close working relationships between the partners in advance of Leicester Council reorganisation, but also gave me an invaluable introduction to the arts world as, up until then, I had been exclusively concerned with museums.

Ten years ago, when I began working at Leicester City Council as Head of Museums, there was almost no central government funding for regional museums. Most were under-resourced and had little part in wider regeneration or social change initiatives. There was no framework for museums and galleries to work together and they were therefore in competition for Arts Council funds.

Traditionally ACEs focus was on the act of creativity, rather than on collection and display. Meanwhile museums tended not to commission new work to augment their collections, not least due to the lack of government, or indeed any other, funding. The Art Funds ongoing campaign work has been significant in trying to address this situation, but the development of the Museum, Libraries and Archives Councils Renaissance in the Regions programme throughout England has also been enormously supportive. It established a crucial framework and meant that for the first time the regions of Leicestershire, Lincolnshire, Nottinghamshire and Derby worked together. Each of the nine Renaissance in the Regions were given a designated Hub. In this instance it was Leicester. The funding for the Hub was much more substantial than it had been for individual regions: £1.8m (20046) growing to £4.3m (20068).

In my new dual-titled role, I am responsible for a major performance venue, a neighbourhood arts centre, a contemporary art gallery, a traditional city museums service with five venues, the historic Guildhall, a range of other heritage buildings and the citys festivals and events team, which co-ordinates Leicesters major events programme. This is a vast remit, but through museumaker, we have discovered ways of pooling and thus maximising resources from staffing to funding, from networking to brainstorming.

Museumaker has engaged museums of all shapes and sizes, from the professional to the voluntary, giving much needed endorsement to those small but crucial village-based venues who rarely get support and praise for their important ongoing work. For instance, possibly Europes smallest museum at Flintham will now have a futuristic Weather Garden funded by museumaker. This artwork by designer Robert Frith celebrates the former owner of the village shop, Fred White, who with his daughter, Muriel, used to keep a daily record of the weather. Frith has landscaped the grounds behind the museum and etched Whites comments on the weather on the paving. Poles create shadows as the sun moves across the sky and act as a windchime when the weather allows.

The project has put museums in direct contact with designers for the commissioning of new, site-specific work, inspired by the collections. For instance Carl Clerkins flexible Crawly seating, inspired by and located in, in the Joseph Wright of Derby room at Derby Museum & Art Gallery which has been extremely well received by both staff and visitors. Separate to but inspired by museumaker is the Hands on History boxes at Northampton Museum and Art Gallery which has commissioned emerging designers to create educational boxes to display work in an accessible manner. Hands on History is a project that aims to create five object handling resources aimed specifically at adults and community groups. The idea is for the exterior of the vessel to reflect the themes and objects within them. The boxes will be works of art in their own right. This shows a new confidence in museums working with contemporary designers to highlight their own collections.

Museumakers ability to access funding for the continued support of the arts and to act as an income generator for museums and makers has been noted by the sector. For the first time ACE is prioritising the visual arts and in 2006 launched Turning Point, a ten-year strategy for the contemporary visual arts. Sir Christopher Frayling cited museumaker as an example of best practice in relation to Turning Points key aims at its launch. The Esmée Fairbairn Foundation contributed substantial funding to the project, as it is advocating the need for strategic development in the heritage sector, and Museums & Galleries Month have supported museumaker from the outset.

Almost the happiest outcome to date is that the partners have decided to re-invest in the project to research and develop its roll-out across other UK regions, proving that they are convinced of the benefits of collaborative practice. The Department for Culture, Media and Sport has appropriated museumaker as a model project to encourage the governments continued funding of Renaissance and ACE in the forthcoming Comprehensive Spending Review. They recognise that getting arts and heritage organisations to work with their local councils accesses and makes the best use of public money for the greatest impact. If the warning signals are correct and the Olympics are indeed going to threaten arts budgets across the UK, then the museumaker model couldnt have come at a better time.