The East Middlesbrough Education Action Zone was set up in 1998 to help schools raise their achievement levels, explains Amanda Smith.
Its commitment to the arts developed through a relationship with the local arts development agency, which delivered several successful arts residencies in the zone. In 2000 the zone employed the equivalent of two full-time arts development workers. This allowed the schools in the zone (eleven primaries, five secondary, three special schools and the Cleveland Unit) to access 60+ contact hours with arts professionals in drama, dance and visual arts in ways unique to the individual schools needs, such as information, workshops, residencies, cross-curricular projects and teacher training. Many schools accessed over a hundred hours working across the curriculum. Booster GCSE art and design sessions raised some grades from G to Cs, raising all expected grades in final exam. 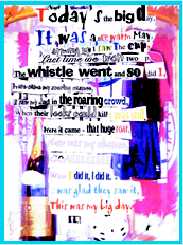 The schools embraced the opportunities in many differing ways. An example of this is ?Boro Boys into Writing?, a digital media and literacy project at the Middlesbrough?s Cellnet Football Study Support Centre, linked to the Premiership football club. 80 primary school boys took part in the project. It aimed to address the purposes of poetry as a form of self-reflective expression, encouraging boys to turn their enthusiasm for football into reflective thought, and to manipulate text and digital images in innovative ways.

The boys took pictures of the Middlesbrough?s football players at their training centre at Hurworth, and in and around the football ground. They explored composition, juxtaposition, scale and imagery and the pictures were a stimulus as the poetry developed. In a further session the boys experimented with text, scale, colour, communicating through typography whilst exploring expression and composition of image and text. Here is some of the feedback from the boys, ?It was so good you can?t make it any better?; ?I?ve learnt a lot of different ways you can write poems and that poetry can be enjoyable?; ?I liked being on the computer and changing the font and going wild with the size of font!?; and ?The work really brung my intelligence out of me?.

And feedback from the teachers: ?It was useful to work in a different environment in a positive supportive activity. The atmosphere was challenging yet providing a highly motivated value?; ?Fantastic! The posters made by previous groups inspire the boys to work hard to design their own!?; and ?A good motivating tool for those children whose interest and enthusiasm in literature is not always what it should be!?

The project will be running again in 2002, and several secondary schools are interested in developing similar projects which are being programmed to the individual needs of each school.

?Boro Boys into Writing? is only one example of a wide range of projects within the zone. Willy Wonka and the Chocolate Factory art installation helped pupils with maths. Another project called Teesout was a partnership project with the Arts Development Department and Percys Scrap Centre which allowed pupils access to arts materials and skills. It was set up following research that indicated that pupils in the zone had few opportunities to engage with creative play at home.