Sounding Board - Keeping the show on the road 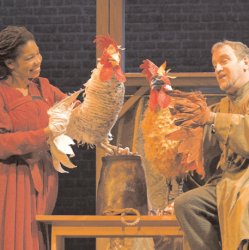 Some companies exist to tour, some tour to exist and some have touring thrust upon them. Whatever the reason for their itinerant life, each week dozens of theatre, dance and opera companies take their shows into venues of all sizes not to mention leisure centres, fields and classrooms giving audiences around the country the opportunity to experience a huge variety of work. This is particularly important in those parts of the country that have little locally produced work. Even in metropolitan areas tours add vitality and variety, complementing and challenging the work of repertory theatres.

The national touring programme has been one of the Arts Councils biggest success stories over the past 35 years. I was dismayed to find and I know many others in the sector who share my concern that the latest re-organisation of Arts Council England (ACE) appears to reduce its national touring role to a footnote (AP issue 132, 23 October).

The published structure of the new Arts Strategy division makes no reference to touring. There is only passing reference to distribution (including touring) in the job description for the new Executive Director/Arts Strategy. Distribution is a very wide catch all, including broadcasting and publishing, and doesnt replace the expertise that, up to now, has been found in the eight-strong Touring Department at the national office. With its recent dismantling, a vast repository of knowledge and experience has been removed not to mention a central overview. It appears to have been succeeded by something considerably less dynamic.

While no one expects things to stand still, we need to see new models for delivery taking into account how the requisite skills and experience are to be accommodated. Notwithstanding the good intentions of the three dozen staff across eight regional offices who now have touring as part of their responsibilities, one wonders how they are all going to acquire the necessary knowledge and historical appreciation of a very complex sector, stay on top of developments across the country and inform a national strategy.

The touring sector needs an authoritative voice, and sufficient clout to cajole the national companies to tour; to discourage multiple productions of The Nutcracker at the same time; to encourage venues to try something different; to ensure an opera companys annual visit is not squeezed out by a musical taking up four prime months; to negotiate with commercial producers; to maintain dialogue with large- and middle-scale venue circuits; and to apply experience gained in one part of the country to another.

I think one of the biggest threats is the loss of a proactive approach to the challenges facing the sector. It is worth remembering that the Touring Department was developed in the 1970s out of the independent Dramatic and Lyric Theatres Association (DALTA), in order to address significant problems of supply and demand at all scales. Without Arts Council Touring we wouldnt have had the creation of Opera North, English Touring Opera (formed as Opera 80), the Royal Shakespeare Companys (RSC) Newcastle season, the transformation of Sadlers Wells Royal Ballet into Birmingham Royal Ballet, the RSC tour of sports centres in parts of the country without big venues, and many international artists would not have been seen outside major festivals. Without Arts Council Touring intervention, many large-scale venues would have disappeared long before the advent of the Lottery to support major renovation, and Cameron Mackintoshs career might have taken a different turn.

Of course, the marketplace has changed enormously over the past couple of decades. The centralised venue-booking service that Arts Council Touring used to offer major opera and dance companies to ensure geographical spread and avoid repertoire clashes, is no longer necessary, but there is still a need for a strategic approach to company/venue match. Regularly touring companies have become much more sophisticated and developed mutually beneficial relationships with venues, many of which have transformed themselves from passive receivers into proactive presenters with strong and informed views about what they want to offer their audiences. There has been a phenomenal growth in venue engagement in co-production and commissioning, with venues forming consortia and alliances to facilitate a variety of exciting collaborations. All this has been supported by ACEs Touring Department.

From its inception, the Touring Department led ACEs engagement with audiences, and has been responsible for much groundbreaking marketing. Individuals working on the ground to promote national touring programmes in particular areas, have grown into substantial regional audience development agencies. Local authorities have overhauled the way they work, many repertory houses now present the work of visiting companies and, thanks to Lottery investment, there are lots of refurbished or new venues round the country. However, some things havent changed much. There are still significant shortages, especially of large-scale drama, but also new writing and work for families and children on the middle scale. The ownership of major venues is still dominated by two managements. According to several small-scale companies, many venues seem more risk averse than they were a decade ago perhaps an indirect consequence of the Arts Councils delegation to the regions of the centrally administrated schemes that supported small venues booking interesting work.

Leaving it to market forces has been suggested as a way of managing the supply of product but, given that it remains very difficult to make money from touring, incentives are needed to enable venues to offer a balanced programme. As the director of one theatre told me, audiences arent satisfied by endless musicals, they need the red meat of serious contemporary drama. If it isnt on offer there is a knock-on effect on attendances for contemporary dance.

The need for a proactive national approach, networking with producers and presenters of work, stimulating applications rather than waiting for them to come in, troubleshooting when necessary, is as great as ever. There used to be a sizeable community of touring practitioners and something of a recognisable career progression; this is being eroded. Without wanting to over-dramatise the situation, the touring ecology is under threat.

It is inevitable that the sector will be told to wait and see how the new system works before criticising it, but ACEs decentralised approach was initiated four years ago and to date many managements interested in touring have found the applications process far from satisfactory. I dont think venues and audiences should have to wait.

So, if ACE has set itself against a centralised touring function, then perhaps an alternative might be to establish a small independent agency, with a remit to support a diverse, high quality and widespread touring programme. Such an agency could champion touring and access to it, maintain a national overview, turn round applications faster than the current system, initiate projects, spread good practice and work with staff at national and regional Arts Council offices. It is likely an agency would need funding but it should prove extremely good value for money and capitalise on many years investment in art, buildings and audiences.

Jodi Myers is an independent consultant, supporting the development of arts organisations and their audiences.
t: 07778 692808 e: projects@jodimyers.co.uk
w: http://www.jodimyers.co.uk