With the Equal Pay Act having come into force in 1970, and every subsidised arts organisation in the UK being required to declare its equal opportunities policy when it applies for public funding, you might be forgiven for assuming that women and men had no reason to worry about gaining equal status in the arts workplace. But you would be wrong, and our survey reveals the extent of the problem (see Fig 5). The average full-time salary for men who responded to our survey is £28,220, while the equivalent figure for women is just £22,853, leaving a gender pay gap of 19%. The picture is better if we only compare men and women at similar stages in their careers: the average salary for women working full-time at senior levels in the arts is £30,551, whilst men doing equivalent work earn an average of £32,303. But the gender pay gap here is still over 5%, suggesting that the concept of equal pay is not as well embedded into arts organisations employment practices as they might think. 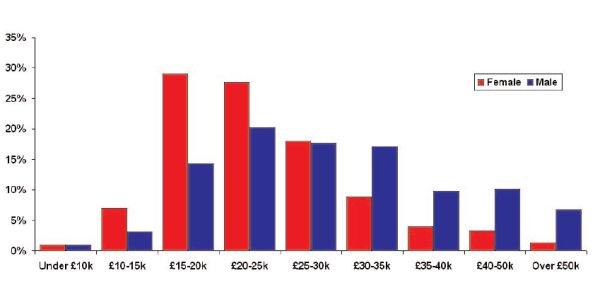 How do these figures compare with national averages? Statistics published in the governments 2005 Annual Survey of Hours and Earnings1 found that womens average annual salary was £22,964, a staggering 27% less than mens average pay, which stood at £31,485. At first glance, then, it seems that the prospects for women working in the arts are bleak, but marginally less so than the already bleak national average. However, the prospects for men, whilst rosier in absolute terms than those for women, are bleaker still in terms of the contrast with what they might be earning by working in a sector other than the arts.

Despite the fact that men occupy only a quarter of all full-time jobs in arts organisations, they are two and a half times more likely to achieve higher salary levels in the sector than women: only 17% of women earn over £30,000 a year, compared with 44% of men. Further investigation into the figures provides a strong clue as to how this situation is coming about (see Fig 6). Over half of all men working in the arts describe their roles as being at senior level in their organisations, with responsibility for all staff in an establishment or department. Less than a quarter of all women working in the arts make the same claim.