The world of children?s arts is rich, vibrant and exciting, but until three years ago no national organisation existed to represent the interests and celebrate the achievements of professionals working in this area. Elizabeth Greaves outlines the work of Action for Children?s Arts, set up to fill this gap, and highlights the discussions of its annual conferences.

Three years ago two leading figures in children?s theatre, David Wood, playwright and founder of Whirligig Theatre, and Vicky Ireland, Artistic Director of Polka Theatre, joined forces to launch Action for Children?s Arts (ACA).It is dedicated to the promotion, development and celebration of all the creative and performing arts for children under the age of fourteen.

A successful launch at the National Theatre led to a rapid growth in membership ? to date about 250 members, some corporate and many individuals. ACA is a unique association of members who are drawn from a wide range of disciplines, including theatre, literature, television, performance arts, visual arts and music. Although members may differ in their specialist interests, all are united in a passionate belief in children?s right to the arts, and ACA is an association which enables them as professionals to share ideas and best practice across all artforms. 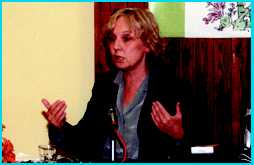 In April 1999 we ran our first national conference which consolidated our membership and brought to the forefront a wide range of issues relating to the status of children?s arts. One significant theme emerged which was to prove the dominant concern of our second conference: the place of the arts within the National Curriculum.(This now extends to include the Foundation Stage for all children aged three to six.)

The second conference was devoted to the Robinson Report ?All our Futures? and to a series of discussions about its implementation. The platform we gave to the committee chairman Ken Robinson proved to be inspirational. The past eighteen months have seen ACA taking several initiatives and we are delighted that our association with the National Campaign for the Arts has encouraged it to co-host a large-scale conference in the spring of 2002 with the National Union of Teachers (NUT) on creativity in education.

Last autumn we were inspired and encouraged by the Bernarr Rainbow Lecture, delivered by Lord Moser, Chairman of the British Museum Development Trust and a member of the Robinson Committee, to the RSA. In it he expressed his profound concerns about the dangers of producing a philistine society if the arts are not nurtured in children. This speech was an important landmark signalling a shift of emphasis for ACA, and when he delivered the keynote speech at our third conference in September this year, he spoke passionately about the importance of nurturing children?s creative interests, quoting former Arts Minister Jennie Lee, who said, ?If children at an early age become accustomed to the arts as part of everyday life, they are more likely in maturity, first to accept them, and later on to demand them.? But he voiced concerns about the fragility of funding and the suspicion with which the arts in Britain are often viewed, and stressed the need to provide high quality education in the arts at all ages.

This conference also provided delegates with the opportunity to experience new areas, with a series of practical workshops and discussion groups which included beginning a drama and making a musical. Delegates were challenged into thinking about the role children can play in good design and architecture ? and to consider the importance of making architecture more child-sensitive. Some striking examples of good design for children also featured in a session presented by the National Network for the Arts in Health whose Director illustrated clearly the therapeutic benefits of the arts for children affected by health problems. We learned about the challenge of reviving the Children?s Film and Television Foundation and we saw at first hand a film made by children which expressed their feelings and concerns about their own housing and play environment.

As a backdrop to the face-to-face communication that takes place at conferences, ACA maintains links with its members through newsletters, a website and emails. Through these channels we have advised teachers and librarians on how to create successful arts events and we encourage organisers to share their ideas and experience with other members. Future plans for enhancing the visibility of children?s arts include an annual arts month and an award for excellence.

What difference have we at ACA been able to make over the past three years? It is hard to say, but children?s arts does seem to be gaining momentum. Not always bottom of the priority list for funding, no longer relegated to the last slot on the general conference programme when most of the delegates have left for home. Slowly but surely, children?s arts seem to be creeping up the political and funding agenda with early years work at the top of several regional arts boards? priority lists and government-funded initiatives such as ?Family Friendly? reaching out to the very youngest children. Little by little, the interest in capturing the imagination of children in the early years is beginning to emerge from the shadows.