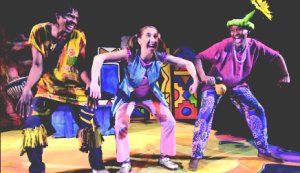 In 2001, Action Transport adopted a new artistic policy that included the aim of creating a culturally rich programme of work. The 2002 Commonwealth Games in Manchester offered the chance to connect our audiences in Cheshire with the wider world. We discovered a strong connection between the education authorities in Cheshire and Guateng Province, South Africa; a number of student drama exchanges had taken place and some primary schools were linked. We decided to devise a production for younger children that would celebrate the cultures of Cheshire and Soweto. This never failed to raise a smile London or Liverpool and Soweto, sure, but Cheshire? Was it a joke?

For two weeks our creative team (director, performer, writer) worked with two Sowetan performers in school communities in Soweto, sharing stories. The devising process continued at our company base, and the resulting production, Dumisanis Drum, toured to over 6,000 children in Cheshire and the North West. During the tour, one of the Sowetan performers, Fikekahle R Dlalisa Ntinti voiced his ambition to form his own theatre company for children in Soweto. Action Transport advised on the development of Vulavulani Theatre Company and together we explored the potential for our two companies to work together.

This planning stage was difficult but essential we learnt a lot about each other during it. Together we talked about how we would work, not simply what we would produce. We decided that the partnership needed to be based upon absolute equality; should be driven by self-interest, not philanthropy; should result in productions made together for touring in both countries; and should be formalised within a Memorandum of Understanding (MoU).

We realised that Action Transports audiences would greatly benefit from the productions our two companies would make together, but to make these productions, both our companies would have to exist. Without support from Action Transport, Vulavulani would struggle. Understanding this allowed us to support the nuts and bolts of survival and growth for Vulavulani. The MoU, set up with involvement from Action Transports Board, explains how we will work together and formalises our principal aim: to jointly develop annual projects which are both a celebration of the diversity of our cultures and a testament to our common humanity. It has been something solid to fall back on when times have been difficult and we risked losing our way. 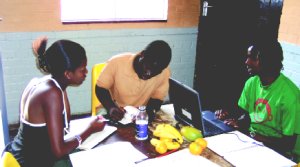 Since 2002, we have created two further productions with Vulavulani; and, independently, Vulavulani have also toured their own version of Dumisanis Drum in Soweto. These productions have taken Action Transport to places that we never dreamed of, and they have launched Vulavulani. Importantly, Action Transport staff and Board members have spent time in South Africa, learning about the political and cultural environment in which Vulavulani operates. We also bear in mind the fact that our companies have different but compatible visions; our partnership helps us individually to deliver on these. Every production we do has shared aims, individual company aims, and individual and shared company responsibilities. Weve made good use of the UK Trade and Investment Passport to Export programme. We also won £10,000 through a Meridian Award; this was split equally with Vulavulani, and weve had support from funders, sponsors and partners here and abroad.

To our knowledge, there are no other companies in Soweto or South Africa taking theatre designed to revive traditional cultures to township schools. Ntinti and his team are pioneers. Cheshire children (98% of whom are white) have been able to see some remarkable theatre, opening a window onto the wider world. Soon British urban audiences will join in the fun too. Both companies are growing creatively, exploring a theatre style that combines the best of African and European performance traditions. Our next production will be made for theatres in summer, 2006. Gogo (Grandmother) will play in rep with a previous collaboration, and Tselanes Song for two weeks at the new Unicorn in London, as part of a UK tour. Ntintis idea is blossoming, and we are still following it into new directions.