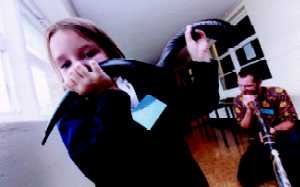 A windfall from the New Opportunities Fund (NOF) has been the financial bedrock on which Yorkshire Youth and Music?s Sounding Out project has been developed. Jan Hinde explains how and why they were successful at tapping into this rich funding stream.

Why did we apply to NOF?

We create opportunities for young people across Yorkshire to make music. At no point did applying to NOF mean re-inventing ourselves or compromising our core values. NOF?s hoop was never too high or too narrow to be worth jumping through. As NOF priorities emerged, it was clear that Yorkshire Youth and Music, as it stood, could deliver.

What did the New Opportunities Fund offer us?

Exactly what it said on the tin ? it offered opportunities. NOF helped Yorkshire Youth and Music, a small voluntary sector organisation, to take a strategic regional lead in a subject area usually looked after by statutory provision.

What award were we given?

NOF awarded us £456,000 for Sounding Out, a £1m three-year after-school music project with twenty-one schools, two Education Action Zones and six hundred youngsters from five Yorkshire local authorities. This kind of support helped us to evolve out of the merry-go-round of fixed-term projects and short-term funding, and to start to address the longer-term processes of community music, which can change entire communities and change the way young people see themselves. Sounding Out was NOF?s largest award in this region for Out-Of-School-Hours- Learning and, to our knowledge, the largest Study Support music project of its kind. Our aim is to have helped set up twenty self-sustaining youth music ensembles across Yorkshire by September 2003.

Why were we successful?

Getting in early will have helped. ?First up, best dressed?, as one of our LEA?s said. Some of the local authorities we?re now working in still haven?t submitted their own NOF bids. We also think Sounding Out leaped out at NOF because it wasn?t another weighty local authority business plan. It will have come across as passionate and homespun, with an understanding of a specialist artform at its core.

We?d had our eye on ?Study Support? and Out-Of-School-Hours-Learning ever since it was a twinkle in Tony Blair?s eye, and had noticed the DfEE rejecting ?liberal, wishy-washy? activities around that time. It seemed to us that those working in the arts were going to have to work harder than other sectors to justify their effectiveness in a child?s learning. Added to this, we were a small organisation proposing to quadruple its annual income through this project, so we knew we weren?t a safe bid. We were going to have to produce a watertight proposal, and secure support for it at all possible levels.

We spent a whole year planning Sounding Out, and developing the partnerships in advance. We took exceptional pains to prepare a ready-to-go business plan, from national partnerships which extended to DCMS and DfEE through to on-the-ground needs analysis of the variety of partnerships in every single school. This was no ?back of an envelope? bid. We had letters of support from two Secretaries of State, one Under- Secretary of State, twelve MPs, five LEA Directors, six Department Heads and all project partners.

Alongside this, we ran a six-week Sounding Out pilot project which strengthened our case. We produced a sixteen page report, written by Sara Robinson, which pointed to evidence of effective arts projects delivering measurable outputs. The DfEE Study Support Team helped publish three thousand copies of the report, which in turn strengthened our partnerships.

No additional external funds were available for the development of the bid though, and we?re still recovering from this ?squeeze year? on our finances.

NOF ? what did they fund?

We wouldn?t wish to pull the wool over anyone?s eyes. Yorkshire Youth and Music could not have run Sounding Out on NOF funds alone. NOF requested that the majority of their funds be spent on ?direct delivery?, in our case on artists? sessions, training and resources for example. The 10% maximum permitted contribution to core costs means that, as with other lottery distributors, NOF potentially leaves its own projects drastically under-funded.

Yorkshire Youth and Music could not run this project without the (gold-dust!) £105,000 from trusts, foundations and local authorities for the real core costs of running this project, and all the things which need to happen before an artist even gets into a classroom.

Taking as a starting point that Lottery funders are a nightmare, NOF is a helpful funder. In their dealings with us they have occasionally been quite flexible and shown support when we?ve needed it. They talk to us, and we can get them on the phone. They release funds up front and their procedures should be in line with a company?s existing financial systems. Their staff show some understanding of our circumstances, and may have stuck their necks out for us, as a small charity, in the level of support they have argued for.

NOF supported our PR launch of the Sounding Out project to a high level, and there was a great turn-out from them at the event, even in the middle of the petrol crisis!

Advice to those applying to NOF?

If NOF will support you to deliver your core aims, go for it! Find out whether other bids are being submitted from your region first, what your relationship is to them, and how much is left in the pot for your area.

If you?re going for big money, audit your systems, work with your board and be prepared to move up a gear on all areas of your company?s accountability. Ask yourself how a big NOF award affects your relationship with core funders, who, having been your major supporters, are now small beer but still vital relationships. How does this affect internal priorities of your organisation?

We are currently working with Dave Price (see Changing Faces, p2) to research a major new scheme of youth music in South Yorkshire, to be launched in 2002. This time around we?ve been fortunate in receiving R&D funds from the National Foundation for Youth music to cover the real cost of developing bids of this scale. Any interested parties from South Yorkshire Coalfields regions, please get in touch!