A lot of arts policy thinking has gone on in Wales in the past year, including a draft five-year arts development strategy by the Arts Council of Wales (ACW) and the Cultural Strategy for Wales, recently published by the Welsh Assembly. As with all the arts policies I?ve ever seen, these documents contain many unarguably good and true words about the nature, importance and potential of the arts to make life better for everyone in all kinds of ways, notes Steve Garrett.The problem is the seductive idea that when a ?policy? on a particular issue has been written, then the issue has been adequately dealt with. Of course, getting the rightsounding words on paper is the easy part. Things get a little more vexatious when interpreting and prioritising from an agreed policy and deciding where the arts money goes.
Any policy can and should stand proudly as a vision of aspiration, but when decisions have to be made about what steps should come first there will inevitably be dissenting views from those artists and arts organisations it affects.Any hopes of a happy consensus after a process of ?consultation? ? no matter how many meetings are held ? are usually soon dashed.When it comes to the funding crunch, there will be winners and losers. And this is the part of the arts funding process that it always seems very hard to find any kind of ?policy? about. Instead, embedded assumptions about the relative values of different art forms come to the surface, although decisions taken may be presented as having a logical or public opinion driven rationale.

It is these assumptions of value, essentially reflecting the dominant culture and the interests of those who have access to where decision-making power is concentrated, which all too often still drive the allocation of resources, no matter how pleasing the written policies may be. The Cultural Strategy for Wales states that ?other forms of music ? classical, traditional, jazz, choral and folk as well as grassroots rock and pop activity ? are far more fragile than they should be? and makes a commitment to addressing this problem. So which policy, decided by whom, states that opera in Wales is still worth a hundred times more as an art form than jazz, as reflected by the relative funding allocation? Or that classical music is more valuable to Welsh cultural life than folk and traditional music? 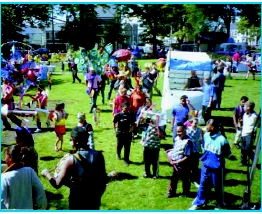 The ACW and the Welsh Assembly have both made commitments to ensuring that new arts initiatives and funding policies should be transparent, consistent and based on evidence, rather than on anyone?s pet project or ?heavy friends?.ACW?s new Chief Executive has announced that the organisation will now be ?making a good start on redressing historical anomalies?. But never mind the policies, look at the pounds.There are only three ways I know to change arts policies: having friends in the high places, making a well informed and crucially well supported and well publicised fuss, reading and writing reports and attending a lot of meetings. If a culture of openness is to become better rooted in the arts funding process and the gap narrowed between policy and practice, politicians must remain at arm?s length from funding decisions, and artists and arts organisations may need to put more time than they?d like into the latter two activities.

Steve Garrett is Director of Cultural Concerns and a member of the Arts Council of Wales. t: 01954 250600; e: culturalconcerns@onetel.net.uk