In the UK we have a huge and inspiring range of summer schools ? from the distinctly specialist to the fairly general, from the small and intimate to those that bring together hundreds of participants. Gavin Henderson looks at their origins and the threats to their future.

The advent of the summer school, like the arts festival, is a post-war phenomenon. Certainly there were earlier instances ? notably with the Fabian Society ? but the full thrust of what we now take for granted transpired because of many factors of the social and technological revolution that was the twentieth century. Legislation for holidays with pay ushered in a culture of ?wakes weeks? for the industrial centres of midland and northern Britain, when whole blocks of people who worked together in the same pits, mills and production lines would all go off on holiday to the same resort, and in due course would gather in activity-based centres promoted as holiday camps by Billy Butlin and Fred Pontin.

But theirs was an escape from a society in which participation, through various working mens? institutes, clubs and societies, provided access to artistic pursuits. They sang in church, and with Sacred Harmonic Societies, they played in brass bands, and danced to the music they made themselves. For the middle classes, the attractions of the resort and spa towns brought resonance of the entertainments created for fashionable society in the eighteenth and early nineteenth century ? with orchestras and theatre troupes performing newly created work to audiences clutching their ?improving book? from the circulating library. Such circumstances were to be transformed with the onset of broadcasting, cinema and recording. As the twentieth century progressed, artistic endeavour was recast as something to take rather than something to make. What had been a vital channel for the human spirit?s yearning to take part was turned into a commodity to be observed and acquired at the flick of a switch.

Critical attention and market forces drove performance to a collectable state; where once one had to struggle to hear fine music ? often in arrangements for keyboard or band ? suddenly it had a shelf life of branded and graded greatness. Heritage culture was born ironically of progressive invention and new technology. With it came a growing unease about the relative merits of the participatory enterprise that had gone before ? the notion of the amateur was given a pejorative twist. The emergence of the Arts Council further emphasised the special position of the professional artist ? in parallel with a new concept that was growing: leisure time. With laudable intent, subsidies were given to enable the widest access to the best in artistic production? but for the passive audience. Scope for those who wished to join in and give vent to their own desires to perform, paint and write was marginalised. The great choral societies (and their festivals of oratorio) dispersed, while the municipal art galleries, with their summer and autumn exhibitions of local artists, fell from grace as new arts centres took root.

So it was that summer schools burgeoned as meeting grounds for artistic aspirations of many levels of ability to join together in search of that individual spark that ignites the creative urge residing somewhere in each and every one of us. Boarding schools, university and college campuses geared up to welcome the additional business which such short-term lets could bring to hard-pressed budgets. Meeting and mating became a powerful side-effect of artistic pursuit (not to mention one girls? school with the attractive notion of a bedside bell push above a sign declaring ?press for mistress?).

When the Edinburgh Festival was founded in 1947 as a means of repairing the rifts of war-torn Europe, various of the artists taking part (notably Schnabel and Bruno Walter) asked ?where is the teaching?? The instigators of the festival (Glyndebourne Opera) were too occupied with other matters to take on board the creation of a parallel summer school, but Schnabel was adamant. Salzburg had created a summer school of art around the artist Oskar Kokoshka ? and Edinburgh should do the same for music. It wasn?t to be, but Schnabel?s student, William Glock, picked up the initiative and next year created the summer school at Bryanston ? and five years later moved it on to Dartington. Here was born the Amadeus Quartet; new composition plugged Britain into the European and American mainstream with courses led by Berio, Copland, Stravinsky, Enescu, Maderna, Nono, Carter and Lutoslawski amongst many others. One class alone numbered Burtwhistle, Maxwell Davies, Goehr, Rodney Bennett and Hugh Wood amongst its students, whilst Colin Davis, Andrew Davis, Rattle, Norrington, Leppard, Elder, Hickox and Glover were amongst the many conductors who cut their teeth on the all-comers (totally un-auditioned) summer school choir. Barenboim and du Pré took their turns as masterclass students, alongside rank amateurs who were given full measure of attention in various workshops. 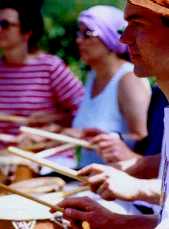 Analysis and historical survey have yet to be made of the impact which summer schools have made on British artistic postwar development. It is considerable ? and very different in its generous inclusivity than (say) the American counterparts of Tanglewood, Aspen and Marlboro, where the emphasis is on the search for new stars to be fêted by attending admirers. Dartington continues to be a very fertile seedbed ? and like its counterparts a longtime casualty in terms of funding from statutory sources.

But times are changing; the cultural and educational agenda is driven by targets of inclusivity. Leisure pursuits have been redefined as lifelong learning. The Higher Education Funding Council (HEFCE) has introduced special funding for new initiatives and start-up funds for summer schools as part of the quest to ?widen participation? in higher education. Hilltop towns in Tuscany abound with English water-colourists on summer courses; Welsh and west country cottages have become short-stay homes for poetry gatherings and writers programmes; gymnasia have been commandeered for dance projects, not to mention the Open University whose summer retreats have reared a more intimate antidote to months of isolated distance learning.

Summer school is an enormous force in the British economy ? both in its direct earnings and in its provocative nurturing of the nation?s desire to improve. It deserves dedicated ministerial attention and better recognition ?but that would bring in rafts of inspectors, quality assurance audits and dictats of output indicators. What is so special about the amazing hotch-potch of summer school endeavour is that it sits outside the bureaucratic chloroform which attends so much of our artistic and educational establishment.

So perhaps that?s why the state is now proposing a compression of the academic year which will mean that few schools and campuses will have vacation time to let out. And the summer school will pass into nostalgic remembrance ? of a time when we enjoyed learning for the sheer joy it brought to the individual whose desire was to simply participate.

Gavin Henderson is Artistic Director of Dartington International Summer School and is also Principal of Trinity College of Music, Chairman of the National Foundation for Youth Music, and Chairman of the Arts Council of England?s Music Panel. t: 01803 847080