Despite the unprecedented success enjoyed by the City of Birmingham Symphony Orchestra (CBSO) under Simon Rattle, during the 1990s sales trends showed a decline in numbers of tickets purchased, which affected the financial stability of the orchestra. 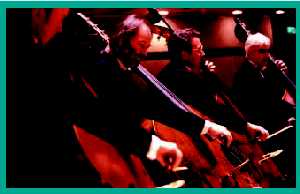 Preliminary sales analysis identified that the fall in sales was not in single tickets, which were holding up well, but in subscription, traditionally a strong area for the CBSO. The orchestra had for decades been running a traditional subscription scheme which offered patrons whole seasons of concerts on specific days of the week or combinations of seasons, encouraging people to book for as many as 20 or 30 concerts in one booking. It had also introduced a General Selection scheme which offered a choice from a limited range of often less popular concerts with a small discount off top prices.

Further analysis found that while retention of existing subscribers was generally good (86% each year), there were some hidden problems: a long-term decline in the number of subscribers willing to commit to multi-series bookings; and an increasing volatility in the behaviour of less-committed subscribers. These people were very repertoire-sensitive and their volatility was increased by some of the CBSO?s more adventurous programming.

The biggest issue was that the CBSO was not recruiting enough new subscribers to fill the ?leaky bucket? caused by natural wastage. Research also found that many new subscribers had attended only very infrequently ? and some not at all. 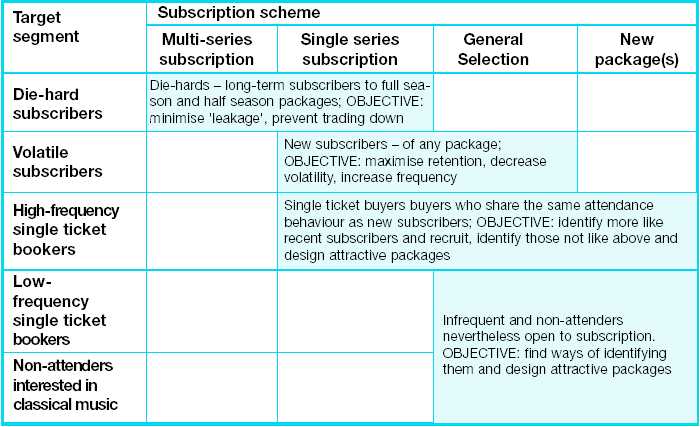 The CBSO sought to address the long-term decline in numbers taking up the existing subscription scheme by devising and testing alternative, clearly differentiated subscription packages (Fig. 1). It had to find a way to maintain subscriber retention, whilst at the same time increasing the loyalty of existing single-ticket buyers. Since present subscribers are by and large resistant to change, this meant introducing a new package which would appeal to a broad range of potential bulk purchasers, without damaging the loyal and prosperous relationship that CBSO had with existing subscribers.

Plotting sales trends against past promotional activity or developments in package design demonstrated that Full Series subscribers were very sensitive to change of any kind. Each time an innovation was made, subscription levels dipped. It was therefore recommended that as few changes as possible were made to full series subscription in terms of balance of repertoire and artists and numbers of concerts. Existing die-hard subscribers were also found to be strongly attached to the benefits of the Full Series package and all such benefits were exclusively maintained.

Although the General Selection package was gradually picking up momentum, it was failing to have the broad appeal that the CBSO wanted. It appeared to be neither comprehensive nor flexible enough to build loyalty. It was recommended that this scheme be replaced with a Flexible Discount Scheme offering a comprehensive choice of repertoire, ticket exchange and accumulating discounts, which would have broad appeal for all tastes, typologies and frequencies of attendance.

The subscription brochure was redesigned with simplified text content and composed from a potential subscriber?s point of view. Experimentation elsewhere had demonstrated that summaries of information produced in-house in letter form worked as well, and in some cases better than full-colour designed print for re-subscribers and it was therefore possible to tailor subscription print for individual market segments.

Finally, a programme of active customer care was introduced to ?ease? existing subscribers into the new structure, including an enhanced and more heavily promoted customer enquiry telephone line and outbound calls to the most valuable individual subscribers.

Sarah Gee, Director of Communications at the CBSO, reports ?Nearly two years on, the renewal rate for fixed day subscriptions rose to 91% last year. We also now have the figures to show just how our audiences will vote with their feet if they don?t like programmes, something we?d known anecdotally for years but couldn?t prove to our planning colleagues. The biggest change has been in our attitude to customer care ? although we?d always provided a very personal service to subscribers, it had been done (albeit to the best of our abilities) on a shoestring budget. Investing money in recruiting and training temporary staff certainly paid off.?