Apparently one of the great things about living in Norfolk is the quality of the natural light, notes Graeme Howell.
This is why you cannot go out for a quiet countryside walk without tripping over an artist with canvas and easel in search of inspiration. The county is home to hundreds of visual artists, from happy amateurs to some of the most respected painters and sculptors in the country. Back in the early 1990s Norfolk and Norwich Festival decided to celebrate this melting pot of artists and launched Norfolk Open Studios. Over the last ten years the scheme has gone from strength to strength and in 2001 had 150 participating artists who opened their studios to the public for three weeks in May. Approximately £87,000 of art was sold during that period and over 13,000 people armed themselves with maps, got into their cars and went viewing. 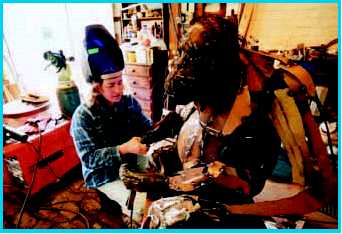 Now, we?re a collaborative bunch here at the festival office and two years ago, to enable the scheme to achieve its full potential, a steering committee of artists was established. The county was divided into Norwich City, North Norfolk, South Norfolk and West Norfolk, with two representatives coming from each area to put forward the artists? views. For anyone who has never had the pleasure, sitting in a room full of visual artists can be an interesting experience. Despite personality clashes that would make a cabinet meeting seem like a teddy bears picnic and occasional turf wars over whose empire particular studios came under, the scheme flourished. After the success of 2001 it became apparent that the steering committee needed to be restructured to allow more representation. The various empires that had been established were cut up along the borders of the district councils and the committee expanded to fourteen members.

Marketing the scheme has always been a hard slog. The usual tale of not enough money to produce enough print, advertising etc etc. Consequently, each region has always been very active in publicising themselves through inventive promotions and taster exhibitions. This year we are going to take advantage of the repositioned Norfolk and Norwich Festival. The two events have always been at different times of year with Open Studios happening in May and the Festival beginning in October. This year the Norfolk and Norwich Festival will run from 1 to 12 May and the Open Studios will run from 11 May to 4 June. This means that not only will we be able to publicise Open Studios in the Festival brochure and use the large amounts of press coverage we get to notify people that it is coming, but that the launch on 10 May will be a Festival event.

The future for Norfolk Open Studios is very good. We are beginning to win the argument with the funders that the scheme requires investment but, perhaps more importantly, the artists are really beginning to use it as a vehicle to promote themselves. The brochure has ended up becoming an annual directory of Norfolk artists with participants receiving phone calls and commissions well beyond the duration of the scheme. It is also immensely satisfying to be involved in such a grass roots scheme that is set to grow and grow.