Who will win? Great fanfares build the tension, then a smattering of smaller prizes precede the announcement of the big one. There is applause and speeches. The winner receives a cheque, a large proportion of the publicity, and his or her work is guaranteed to sell, if the sponsor hasnt already snapped it up. But what of the other artists involved in the show? What do they get out of the experience? On the surface, not much. So why do thousands of artists submit work to art prizes every year? Motivation Robin-Lee Hall is a regular contributor to many open art prizes, but has never won. When I asked her why she exhibits she explained, The prize money motivates a lot of people to try and show, but if it is a prestigious exhibition it is worth contributing, because galleries will look at that kind of thing favourably on your CV. Paul Thomas, co-founder of the Jerwood Drawing Prize, elaborates, It is almost mandatory as an artist to build your CV through ever better inclusions in exhibitions. Its also pretty difficult to get a gallery interested unless you have this track record. Open art prizes, it seems, can be vital to the artist looking for a gallery. As well as good CV material, they also offer a place to sell and to be seen, with exhibitions taking place in major galleries and often going on tour. The Royal Academy Summer Exhibition is the largest open contemporary art exhibition in the world. This year it had over 100,000 visitors and artist Christopher Brown sold 110 editions of his linocut there. It is no secret that collectors are drawn to art prize exhibitions as a way to find undiscovered and often under-priced artists. The ING Discerning Eye Exhibition by-line, Connecting New Artists and New Audiences, identifies this effect. After years of art sponsorship, the Discerning Eye has an enviable buyers list. Art prizes benefit exhibiting artists in numerous ways, especially if the artist knows how to take advantage. 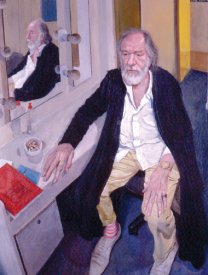 Capitalising on the win BP Portrait Award winner Stuart Pearson Wright thinks so highly of the exhibition that he almost regrets winning it, as previous winners are not eligible to enter the competition again. He had been submitting for only four or five years when he won first prize, aged just 25: I first saw the prize when I was 16 or 17 and I thought, Im going to win that one day. A shocked Stuart had banked on at least ten years of hard work before getting anywhere: If you achieve your goals, where do you go from there? And how do you follow up on that? It is easy to see how he would miss showing in this annual exhibition; it is highly regarded and brings with it a great deal of respect, and opportunities. However much he stresses that taking part is important, Stuart has to admit that the prize money and publicity did come in useful. Many open art prize winners have faded into obscurity, but not him. When I asked him if he would agree that he had built his career out of winning art prizes, he responded, I built a career out of claiming each and every opportunity that came my way. Like spotting John Hurt in the street and running after him to ask if I could paint him. A lot came out of that. Stuart has known how to play the system how to network. He has gone on to win numerous prizes and awards, including first prize in both the Kaupthing Singer & Friedlander/The Sunday Times Watercolour Competition, and the Garrick/Milne Prize, and left a media trail in his wake: I think it is because I had an antiques dealer for a mother a lot of my contemporaries seem very ill at ease with understanding how the media works and playing to that. Stuart Pearson Wright is a clear example of winner takes all. With arts budgets becoming thinly spread, charities cannot keep up with the demand from the visual arts sector. While art prizes bestow a large proportion of the spoils to one prizewinner, there are other benefits to artists. Artists build a strong CV, they have networking opportunities, their work is seen in a major gallery, and they have the chance to sell. In terms of running open art competitions, Paul Thomas from the Jerwood Drawing Prize sees prize money as necessary: It attracts artists who are relatively better known and the standard generally goes up& if the standard is high it results in sales and selling shows are of interest. Also, the media will only really review shows seriously when the work reaches a certain level of credibility. The big prize serves a purpose it encourages artists to submit, it provokes media attention, which in turn increases visitor numbers and attention on a given artform. While this remains the case, is it fair to suggest that winner takes all? Sponsorship Art prizes need funding, but why sponsor an art prize? Sponsors can be arts charities, but they are more likely to be marketing sections within corporate bodies. What the sponsor gets out of such projects is a positive press and marketing campaign, an image that is charitable and creative, and a uniquely branded Private View to which they can invite their clients. It also allows them to fulfil a lot of corporate social responsibility objectives. Whether or not motivated by philanthropy, arts sponsorship is a high profile, cost-effective marketing tool. Never mind the winner, the sponsor gets a lot out of an art prize. Prizes are often established to help reverse the decline, or raise the profile, of a particular type of art or artist. Watercolourists, portraitists, representational painters, students, emerging artists and those aged over 60 are given annual encouragement in the form of art prizes. The society-led exhibitions at the Bankside and Mall Galleries are permutations of the same thing. One success story has been the Kaupthing Singer and Friedlander/The Sunday Times Watercolour Competition, celebrating its 20th anniversary this year. The prize has renewed interest in contemporary watercolour painting from artists and audiences alike. Another major example is the Garrick Clubs sponsorship of the Garrick/Milne Prize, which has revitalised the art of theatrical portraiture. Just three years old, the Lynn Painter-Stainers Prize for representational painting, established by art enthusiasts at the Worshipful Company of Painter-Stainers, is endeavouring to champion the art of painting from direct observation. The benefits of these prizes to art, artists and sponsor reach much further than the big prize winner.