James Blackman, Co-Director of Creative Learning at the Lyric Hammersmith, names the people whove influenced his career in the arts. 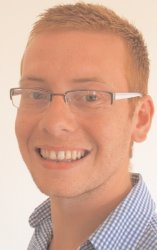 Peter & Vi Hazell
My grandparents were the first people to introduce me to the world of theatre. In his heyday, my grandad was a keen performer, taking to the stage in many Gilbert & Sullivan productions both here in the UK and in Singapore, where they lived in the 1960s. My grandad still has an amazing ability to pick out a harmony, and they continue to spend far too much of their pensions on theatre tickets!

Nick Stimson
Nick is a director, writer and poet. I first met him when I was a member of the Plymouth Theatre Royal Youth Music Theatre. Nicks passion, enthusiasm and dedication to new musical theatre inspired me instantly. Working with young people, he treats everyone as equals and commands great respect. During my time in the company I had some great opportunities and experiences, including touring across Poland. I am really pleased that Arts Council England is re-prioritising young peoples participatory theatre as I recognise first hand the transforming effect it can have on a young person. Nick remains a very supportive career mentor, sounding board and friend.

Imogen Kinchin
I have known Imogen for many years. We first worked together in the Education Department of the Theatre Royal Plymouth where we immediately found common ground in our love for contemporary, groundbreaking theatre. Imogen now works for the commercial, West End producer Act Productions, which more recently has taken her across the globe with Edward Scissorhands. She is a fantastic friend who is an exceptionally talented producer, and I sincerely hope to share an office with her again sometime in the future.

Joan Lazarus
Joan is a teacher, artist and lecturer in theatre and education, who is based in Austin, Texas, I met Joan whilst working for Zurich Young Peoples Theatre when we were on a cultural exchange with a bilingual company that works with Hispanic young people. The whole experience was unique and Joans knowledge and gift at working with hard-to-reach young people further inspired me to pursue a career in theatre education. Im really pleased she is visiting the UK next year and look forward to showing her around the Lyric.

Hilary Strong
Hilary is Executive Director of Greenwich Theatre, having previously been Director of the Edinburgh Fringe Festival. I worked for Hilary when I first moved to London and learnt many important lessons from my time at the theatre. The team approach works brilliantly at Greenwich and I always felt my opinion was valued and often acted upon. Hilary is a brilliant leader, a fount of knowledge and always manages to find light and humour in what can sometimes be a very difficult industry.

Who are your gurus?
Why not tell ArtsProfessional readers about them?
For details e: editors@artsprofessional.co.uk