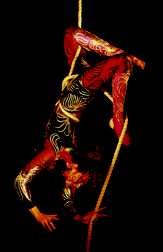 Circus is thriving in the UK with something for everyone, whether professional artist, community participant or audience member. But are we giving it the respect and support it deserves? Dorothy Max Prior looks at the current state of the art and urges us to value it just as we would any other art form.

Circus, for me, is many things. First, the childhood memories of trips to Olympia to see the legendary Bertram Mills, entranced by everything but particularly the lovely ballerina on horseback. Then there are the many touring circuses that I?ve taken my own family to see, the grown-up child just as excited as the little ones by the razzmatazz and romanticism of the big top. Next, the street arts and festival events I?ve been involved in as an arts professional, and the education programmes and professional training projects in circus and street performance I?ve administrated with companies such as Scarabeus Theatre.

In the past few years my view of circus has been further expanded by witnessing the development of ground-breaking new theatre productions that use circus skills, such as ?Philomena?s Feast? by Fernando and Zacharini, which was presented recently as part of the Circus Space Festival. On reflection, this personal journey could be seen as a parallel to the development of circus in this country - which has embraced the fixed venue spectacular, touring tented shows, performance in public spaces, youth and community circus and experimental collaboration with other arts disciplines.

It is great to see circus moving into new artistic territory - but we shouldn?t forget that the classic circus model is the foundation stone upon which circus as an artform is built. This tradition may be seen as an encumbrance by some of the art world - something to remove oneself from for fear of not being taken seriously by funders and bookers, but the heritage informs current practice, whatever form that takes and also exists as a cultural reservoir of memories, mythologies and metaphors that continue to inspire. An example of this inspiration is in ?Claire de Lune?, the new show by aerial company Skinning the Cat, which features a burlesque mistress of ceremonies and two exotic beasts in human form, a lovely carnivalesque play on the traditions of the circus world.

Circus currently seems to be everywhere. It is an important element of many UK festivals. Cottle and Austin?s traditional tented show is currently at the Brighton Festival and the Stockton International Riverside Festival features many contemporary circus acts. A main attraction at the Edinburgh Fringe will be the new Cirque Surreal big top show called ?Voyagers?. Although there is only one circus-dedicated fixed venue (the Hippodrome in Yarmouth), there are an increasing number of theatres and arts centres including circus in their programming - such as the Playbox Theatre in Warwick. Even the National Theatre in London has an extensive programme of outdoor events each summer, with circus an important element.

There is also an emerging new batch of circus theatre companies. Two of the country?s leading circus schools have associated companies. Circomedia in Bristol has an in-house company called Dark Horse, whose show ?Divurgence? integrates spoken text with acrobatics and juggling. Circus Space in London has an affiliated production company, the Generating Company, which has risen from the ashes of the Millennium Dome to create ?Storm?, a feelgood show that mixes fast-moving visual theatre with high-flying circus skills in a warehouse party setting. Whatever you think of the Dome, it remains the case that the two year intensive training and performance schedule gave a boost to circus by creating a pool of soundly trained circus performers.

These two circus training schools have grown from strength to strength in recent years, offering a range of classes for all abilities, training for professionals and practice space for performers - and at Circus Space it is now possible to take a BA honours degree in circus. Alternatively, there is the traditional train-on-the-road option with the Academy of Circus Arts, affiliated to Zippos Circus. Skylight Circus Arts in Rochdale and the Greentop Circus in Sheffield are two other examples of centres that are offering a route into training as a circus professional - as well as a commitment to youth circus and community projects.

There is plenty of work being created, and with circus moved to the drama division, we saw a commitment from the Arts Council of England to value circus as an art form and find the ways and means to support it.

But all is not rosy in the garden. Despite the talk of commitment, at least one major player in the new circus renaissance, Mamaloucos, is verging on dissolution due to lack of financial support. Without focusing too specifically on the needs of one particular company, it is nevertheless reasonable to deduce that the ways in which circus might need to be funded are often different to the needs of other artforms - tented touring circus having a very different economic operation to other forms of touring performance. Without the arts officers in place to understand these different ways of working, it will inevitably mean that circus most closely resembling dance or drama in its operational infrastructure will be the type most likely to be understood and supported.

Life for small-scale circus and individual acts appearing at urban and rural festivals has been difficult throughout this spring and summer, with the fear of foot and mouth disease adding to the restrictive practices of some local authorities.

It is also true to say that although circus is appreciated widely by the general public, it still struggles to receive proper critical appraisal. Specialist publications such as King Pole, the Worlds Stage and Total Theatre Magazine give proper attention to circus, but there is little reasoned response elsewhere. Time Out magazine has nowhere to place circus listings - recently placing the Generating Company?s ?Storm? under museums! The broadsheet papers review contemporary circus, but usually allocate the job to the dance critic who assesses the work by dance criteria rather than circus criteria. Would leading contemporary dancers value reviews in the ?serious? press written by people with no knowledge of their art form? I think not.

And although there is a wealth of training opportunities in selected pockets of the country, there is little in the way of a developed infrastructure that could take someone on a path from classes as a child through to professional training. They would need to map their own path with little chance of receiving any proper career guidance.

It is for all the above reasons and more that the Circus Arts Forum has been set up. Funded by the Arts Council of England, it is an independent organisation that offers support and information and works as a lobbying body to advocate for circus. The Forum working group is composed of a selection of the movers and shakers in the circus community - both classic and contemporary. We hope and expect circus to be seen over the coming few years as the vibrant, dynamic and enterprising art form that it is and to help create an environment in which circus in all its many forms can continue to flourish.