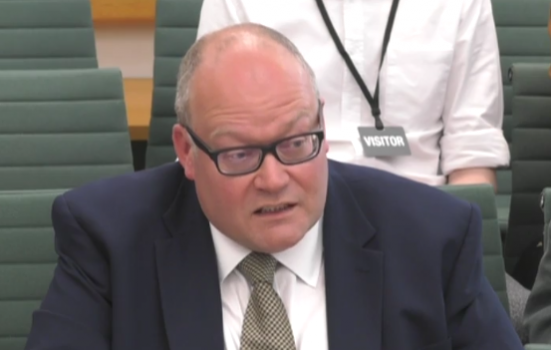 A government-led review of the functions and effectiveness of Arts Council England (ACE) will take place next year, the organisation's chief executive has revealed.

Appearing before the DCMS Select Committee today, Darren Henley told MPs that as part of the process, which should take a maximum of six months, he will be making a "robust case" highlighting the virtues of the body.

Confirmation of the date of the forthcoming review comes after Culture Secretary Nadine Dorries last month said that getting rid of ACE was not on the government agenda.

The review is part of the Public Bodies Review Programme, launched earlier this year by the Cabinet Office, which requires DCMS to examine the structure and processes of all its public bodies. The initiative builds on the 2010 - 2015 Public Bodies Reform Programme and the 2015 - 2020 Tailored Review programme.

Henley, questioned by committee member Kevin Brennan on the process, said: "All arm's-length bodies are being reviewed and we are no different from that.

"There are some [DCMS bodies] being reviewed this year and we will be next year. We have had reviews in my time. In the seven years I have been here we have had a tailored review. We will make the best possible case for Arts Council England."

The review will look at the effectiveness of the organisation and its governance, as well as assessing whether its functions should be delivered by the State, or whether an alternative, such as abolition, privatisation, or a merger is "more fitting".

Henley told MPs he believes the organisation currently has a strong set up.

"[We have] an expert and experienced set of people, nine offices around the country and 75% of our staff are based outside London, so we are a properly devolved organisation already," he said.

"We believe we can work with people on the ground as a national organisation with a local footprint that enables that to happen and we will robustly make that case as part of that review."

Henley was also quizzed about ongoing efforts to level up arts and culture across England. He said going forward ACE wants to help develop infrastructure in its 54 priority places, which between them received £83m in funding during 2021/22.

"One of the things we want to do with those initial 54 is put Arts Council colleagues' development time into those places," he said.

"We are trying to actively go out onto the ground and develop on the ground cultural infrastructure.

"One of the things I think is very important is around co-curation. It's not about us saying 'this is what you ought to have'. We have a lot of experience in this with our Creative People and Places programme where we have co-curated on the ground in places where there was traditionally very low engagement and poor provision."

Henley was also questioned by committee chair Julian Knight on whether the organisation can be "taken seriously on levelling up" given London's Royal Opera House alone recieved £96m of ACE funding over a three-year period.

"Putting on opera is expensive as an artform. One of the things we are doing in the next investment round for NPOs is we will be moving £16m out of London in each of the first two years then a further £8m on top of that in the third year of this funding round.

"There will always be a mix - we need to have a capital city that punches on the world stage, but levelling up is about increasing everywhere else so within quite straitened times we have got more money from the government and we are investing that outside of London.

"That comes on top of a move of money outside of London in the last funding round. So yes, we are moving money and there will be a reduction in the amount of money we are investing in London and that will all go to other parts of the country and all of the uplift the government has given us will also all go outside of London.

"It's a direction of travel. I'd like to go faster, but we are going as fast as we can."

Plus ca change? No, Not change for the sake of change. Even worse, the threat of using 'change' as a' 'weapon' to 'dislodge the enemies of the new establishment'. Enemies, really? When did they emerge? It is a mindset issue. Look for enemies and you will find them everywhere around you. Treat everyone with professional respect and intellectual courtesy, the enemies disappear,