As Oliver Dowden establishes a working group on "retain and explain", arts workers afraid of exclusion, censorship and funding cuts are speaking up. 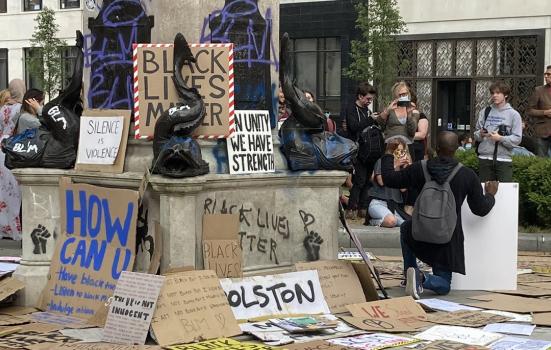 The plinth that formerly held the statue of slave trader Edward Colston
Photo:

Arts workers afraid of exclusion, censorship and funding cuts are fighting back against the Government's policy on contested heritage.

Culture Secretary Oliver Dowden announced a new working group to put the "retain and explain" approach into practice following a meeting with major arts, cultural and heritage organisations on Tuesday.

At the same time this meeting was taking place, more than 260 sector professionals answered "an open call to the woke minority".

Attendees discussed how best to counter Dowden's reported view that organisations must "defend our culture and history from the noisy minority of activists trying to tear Britain down".

A culture war has brewed between DCMS and its sectors in recent months as Conservative MPs have painted groups investigating and challenging the country's colonialist history as "elitist bourgeoise liberals", "woke worthies" and "a baying mob".

"You can undermine something by characterising it as an angry mob," event organiser Christina Poulton, Executive Director of Strike A Light Festival, said.

'The woke minority' is not the only group organising in opposition: campaign group Hands Off Our Heritage is circulating a template open letter to MPs to pressure Dowden to support cultural organisations "without strings attached", and a petition with 400 signatures on Thursday urges the Government to "consult widely amongst the arts, culture and heritage sectors in order to obtain a rounded picture of decolonisation and reparative practices" in the sector.

A joint letter from culture sector representatives of the PCS, FDA and Prospect unions to National Museum Directors' Council Chair Sir Ian Blatchford says its members are "deeply worried that Government policy, and a seeming desire to ride roughshod over the arm's-length principle, will lead heritage bodies to row back some of the important work that has been carried out" to date.

"In our view any backward steps in these areas will be tantamount to 'airbrushing' history in the way that is apparently disapproved of by the Secretary of State."

Sir Blatchford, writing in The Telegraph, said the meeting with Dowden was "a refreshingly sane discussion".

"I’m happy to report that the importance of independence was underlined, not undermined at the meeting.

"We should not be at the beck and call of every loud voice, or rush to change our museums at the first sign of complaint from a particular lobby, and we should steer clear of political activism.

"Although a concern has been raised by the current minister, a Conservative, one can well imagine that politicians of other hues would have the same expectation."

Arts professionals on Tuesday's call expressed their anger and concern that the Government's heavy-handed approach to heritage will eventually come to bear on a wider variety of cultural work.

In October, Dowden warned museums against removing statues of controversial historical figures like slave traders and suggested doing so would lead to funding cuts.

"My concern with working for an NPO (national portfolio organisation) is, is this going to trickle down? Are we going to get some mandate from DCMS?," Strike A Light's Co-Artistic Director Sarah Blowers asked.

Black arts workers, who ArtsProfessional has decided not to name, spoke of being angry but worried about the backlash if they express that publicly.

"There's a lack of understanding about the political nature of being ethnically diverse," one participant said.

"As a Black woman I have a real personal fear that it's about silencing people who look like me."

Attendees discussed the need to re-frame the debate to avoid the perception of a culture war between conservative policymakers and the overwhelmingly liberal cultural workforce.

One person commented: "We need to make sure what we're talking about here is in terms of transparency, which is something people on the left and the right care about."

'They are scared of us'

Gareth Morgan, Learning and Visitor Experience Manager at Nottingham Castle, said politicians are scared of the sector because its workers are trained educators, storytellers and dramaturgs who can influence the public.

"They are scared because we tell the better stories."

"I think the whole sector is on edge. There's a worry about funding, especially the way the National Trust has been discussed in all this."

The trust has been the target of ministerial scorn for a report that investigated its properties' historical links to slavery.

"We're trying to be as steadfast as we can," Morgan added.

Dowden and other policymakers "are not being very honest about the motivations behind this," she added.