The number of partnerships connected to the Without Walls consortium, one of Arts Council England’s new core-funded organisations, will expand to involve 36 members. 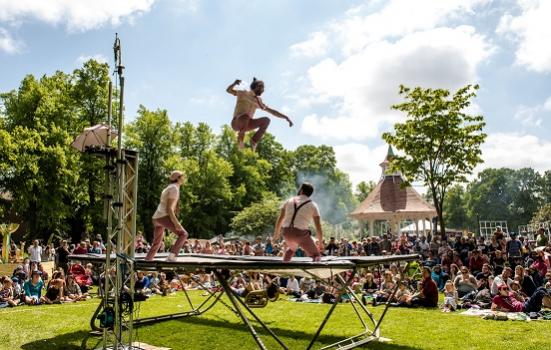 A major network of festivals in England has doubled in size, expanding activity to new parts of the country for the first time.

Without Walls (WW), a consortium of outdoor arts events targeted at people in towns and cities with lower levels of cultural engagement, has grown to 36 partners – including first-time members in the South West, Greater Manchester and Somerset.

WW has also established a new network to provide support and advice to eight emerging festivals.

The admission into the portfolio follows around a decade of sustained growth for the network since its creation with five core members in 2007. In 2013, WW used ACE funds to set up a touring network specifically focused on areas of lower engagement in the arts, carrying out a broad range of activity including outdoor and indoor arts, large-scale projects and more intimate work.

The organisation has now announced eighteen new members, taking its total membership to 36. Josephine Burns, Chair of WW, told AP the incoming festivals all recognise the power of outdoor work to “heal divides”.

WW’s touring partnership has been expanded to include new members such as Bournemouth Arts by the Sea, the first South West partner; Oldham Council and The Rochdale Feelgood Festival, both based in Greater Manchester; and Birmingham Hippodrome.

WW has also announced eight partners in a new Creative Development Network, which will provide mentoring and development opportunities to smaller festivals or initiatives. Burns said that while these organisations will not have the same touring relationship with WW as members of its other networks, they can take advice from WW on their programmes – to help them discover “what works best in their areas”.

Organisations in this network include Northwich’s Cheshire Dance, London’s Moon Festival, and Cultural Spring in South Tyneside and Sunderland.

Burns said that while WW commissions a lot of touring work, core funding from ACE has also allowed it to provide research and development funding previously inaccessible to many of its members because they work on a time-limited, project-funded basis.

She drew parallels between WW’s mission and Creative People and Places (CPP), ACE’s network of activity in areas with lower cultural engagement. Ideas Test, based in Swale and Medway, and First Arts, in Ashfield, are two of the seven CPP projects to have joined WW’s networks.

“We’ve got a very strong record in commissioning from BAME-led and deaf and disabled artists, and that’s really important for our audiences because we’re often taking these shows to places where work of that kind is still not seen much,” she said.

Burns added that more than three million people have attended WW festivals over the past three years. She said cultural networks that “enthuse and entrance” people across generations, class and race would be increasingly important as the UK faces potential turmoil over the coming months as a result of its changed relationship with the European Union.

“That’s one of the things about outdoor work,” Burns added. “At least for the moments during the show, and goodness knows they’re precious enough, they really do unite people in some collective sense of wonder, fun, and community.”