Two West Yorkshire schools decided to put the arts at the heart of their curriculum. They found different challenges – but had similar successes. 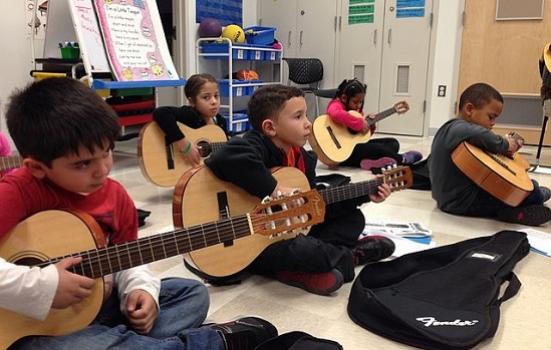 Music can improve children's numeracy through counting and reading through the familiarity of syllabic patterns
Photo:

Specialist teachers, dedicated arts spaces and partnerships with local and national arts organisations are key to creating a successful “arts-rich” school, according to a social change organisation.

The Royal Society of Arts, Manufacturers and Commerce (RSA) identified 46 “art-rich” British schools that prioritised teaching a broad range of arts subjects or had a highly-developed, arts-based pedagogy shaping their curriculum: “In practice, these were often found together.”

But schools’ abilities to develop students’ cultural capital – and prove the benefits of doing so – are being squeezed by “the national accountability regime”, which values on-paper results more than intangible improvements, the society’s research report says.

RSA interviewed 24 schools, visiting nine of them to better understand the value of an arts-based education and find out “what enables and motivates some schools to place the arts at the heart of the learning”.

While different circumstances triggered individual schools’ investment in the arts – relocation, new government investment, the arrival of staff with passion and skills in the arts, poor Ofsted evaluations or exams results, or a desire to differentiate the school from its competitors – the research identified several practices common to arts-rich schools.

Gomersal Primary School’s art room is large and bright, with colourful artwork adorning the walls and fresh creations in drying racks scattered around the room. Students using the once-neglected space told the visiting RSA researchers that Maths and English are “important, but not the only thing that matters”.

The room is “a benefit but not an essential ingredient” to Gomersal’s success as an arts-rich school, according to its specialist art teacher Mandy Barrett.

A poor Ofsted result in 2016 “sparked an intensive school improvement process,” RSA’s report says. New headteacher Melanie Cox decided to put the arts at the heart of the school: pupils have at least one full morning or afternoon of arts time per week, teachers receive arts-focussed professional development and perform arts outreach with other schools, and the school has an active Student Arts Council that suggests improvements.

A skills audit “unearthed hidden talents among [the] staff”. A cover supervisor who runs her own performance company now leads’s Gomersal’s performing arts programme two afternoons per week, while its dedicated ‘Arts Link Governor’ is using skills and resources from his radio and producing career to improve the school’s music offer.

Last year, Gomersal was shortlisted for Creative Schools of the Year in the TES Schools Awards. Its Ofsted inspection report – up from ‘Requires Improvement’ to ‘Good’ – noted that “the good quality of the curriculum and visits into the wider community contribute well to developing pupils’ spiritual, social, moral and cultural understanding”.

School staff told RSA that “within the pressurised context of a Requires Improvement judgement, it can feel like a risk to go against the grain in taking an arts focus”.

Cox said that focus has contributed to students’ increased confidence, wellbeing and sense of identity, but is hard to evidence the value of those gains to officials: “it’s one of those immeasurable things. And that’s the difficulty, isn’t it? How to measure it.”

RSA’s report points to Feversham Primary Academy as illustrating a possible solution for educators trying to evaluate the impact of the arts: “[This] school notably bucks the trend and may chart a way forward for other schools who wish to understand how their arts practice can make the greatest difference to pupils.”

Feversham and its headteacher, Naveed Idrees, have garnered media interest in recent years for crediting its remarkable turnaround from ‘Special Measures’ to ‘Outstanding’ to its investment in music teaching. Idrees explained that the school, situated in one of the country’s most deprived neighbourhoods, has “the same children, same teachers and same community and because of the arts-based curriculum, it’s now in the top 2% of the country” for progress in English and Maths.

Its pupils receive three music lessons per week, paid lessons in piano, drum, trumpet or guitar, lunchtime and after-school music clubs, a weekly music assembly and three music-based ‘enhancements’ per pupil, per term – one local, one in the wider community, and one visitor to the school.

Feversham uses the Kodaly Method, a pedagogical approach that uses exercises and games based on rhythm, singing and folk songs. This technique, which has been linked to improving reading, numeracy and IQ test scores, requires a trained practitioner but few other additional costs.

The method is used across Feversham: its staff told visiting researchers that they have adopted some of the cues used in music lessons in their classes, for example to prompt students to pay attention or sit down.

RSA concluded: “In general, if schools draw on existing research to make choices about what arts practice to offer, they can be more confident that they will see the impact they expect.”

Secondary schools must aims for 75% of their pupils to be studying a combination of English Baccalaureate (EBacc) subjects at GCSE by 2022, and 90% by 2025.

“On the other hand, they must demonstrate to Ofsted how they are developing pupil’s cultural capital. The former does not include the arts, the latter seems impossible to achieve without them.”

RSA’s report does not make specific recommendations for schools or education officials: “there is no silver bullet.

“However, we think that the stories of the schools featured in this report offer some inspiration. In spite of the changing funding and accountability context, these schools have steadfastly committed to the arts.

“In doing so, they have consistently delivered curriculum breadth and cultural capital to their pupils. As the report demonstrates, this requires dedication, effort, and – sometimes – difficult choices.”

At Shakespeare Schools Foundation, we’re delighted to see an ‘arts-rich’ curriculum and partnerships between schools and national arts organisations being celebrated in this article from Arts Professional. We’re especially pleased to see Feversham Primary Academy, Bradford, who took part in the Shakespeare Schools Festival in 2019, identified as having shown vast improvements in academic attainment and the development of students’ life skills thanks to an ‘arts-rich’ approach. As the article notes, the school is in one of the most deprived areas of the country, highlighting how all children can achieve and exceed expectations, when given crucial opportunities to engage with the arts. At Shakespeare Schools Foundation, we know the vital role the arts play in supporting attainment. As one teacher from our Festival in 2019 told us, “A girl who struggles with her reading and writing and confidence in general has gone from being afraid to speak to an audience to delivering some really tricky Shakespearean language with amazing expression.” Teachers tell us how through working with Shakespeare Schools Foundation they see students making gains right across the curriculum. According to our evaluation of the Shakespeare Schools Festival 2019, 86% of teachers said their students’ academic attainment had improved. 98% told us their students had more confidence. As a charity, we work with all types of school (primary, secondary, special schools and Pupil Referral Units). We’re especially committed to reaching students in the most deprived areas of the UK who might not otherwise get this life-changing opportunity - in 2019 over a third of the schools we worked with were in the most deprived parts of the UK. With the evidence so clearly pointing towards the benefits of offering students an arts-rich experience on both academic attainment and the development life skills, we urge schools to join us for the Shakespeare Schools Festival in 2020. Through taking part, children from all backgrounds and of all abilities can gain the confidence and skills they need to step out on whatever stage they choose. For more information about the Shakespeare Schools Festival, and to sign up, please visit: www.shakespeareschools.org/the-festival Ruth Brock, Chief Executive of Shakespeare Schools Foundation