High demand for the first come, first served fund forced its early closure, to the panic of those who missed out. 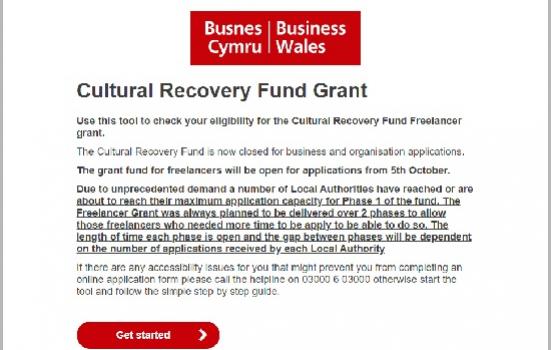 Welsh freelancers are despairing after an emergency funding portal closed to them just an hour after it opened for applications.

The Welsh Government says "high demand" in some local authorities forced the fund to close applications for those regions one to two weeks earlier than anticipated. Applications are still open for areas of lower demand.

A spokesperson said the fund "was always meant to be delivered in two phases" and a second applications round will open as soon as possible.

This two-step staging was agreed with the freelance sector and unions prior to the initial round of the £7m fund to give people who need more time to apply the ability to do so, the spokesperson said.

But Welsh cultural freelancers weren't expecting timing to be so tight the first time around.

Freelancers took to Twitter to express their anguish at being locked out of the portal on Monday (October 5), in some cases by 11am.

Theatre maker Sarah Argent said people were in tears  after trying to apply at the end of their work day, put their baby down for a nap, or waiting for their turn on the household computer.

Actor-playwright Alun Saunders said he started his application at 10am but didn't complete it until the afternoon: "I had to work a delivery shift to keep the (guaranteed) money coming in."

"[By the] time I came back to it at 12pm my opportunity had gone. I'm broken right now."

System crashes consumed too much time for many to re-start their applications: "Managed to shift things around with childcare, got to computer at 10[am] ... then every time I tried to upload my proof of eligibility, it would crash. Then it was too late," Cardiff-based actor Richard Elis said.

The funding applications system was divided by local authorities, which are responsible for delivering grants of up to £2500. Areas like Cardiff, where demand was higher, filled up fast and applications were closed in some cases before a council's quota was reached.

Grassroots action group Freelancers Make Theatre Work, which was involved in discussions about how the fund would be delivered, said it was "perplexed" and would investigate what happened.

"It is NOT a race. It is NOT right," the group tweeted.

It suggested there may be more money for Cardiff and other oversubscribed regions in phase two if the Government reallocates money from areas with lower demand.

In materials released by the Welsh Government, the Wales Freelance Taskforce said it hoped the fund "will help freelancers survive this crisis".

Recent research by the taskforce suggested more than a third of Wales' culture sector freelancers don't have sufficient income to live on.