The Welsh Government says it will deliver the long-awaited scheme to “make sure that lack of money will no longer be a barrier to young people learning to play an instrument”. 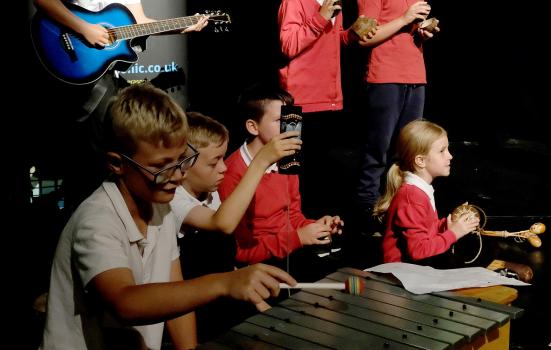 A 2019 Creative Collaboration project funded by the Arts Council of Wales
Photo:

The pledge follows years of debate over how best to address a growing inequality of opportunity.

Welsh Labour committed pre-election to establish a service that closed the gap and made sure that "a lack of money is no barrier to young people learning to play an instrument”.

It has vowed to build on a 2020 Music Services Feasibility Study that identified a “lack of consistency and coherence” in music education in Wales, and deliver a long-awaited national plan for music education via a “sustainable, equitable and consistent model” that is free at the point of use.

The Welsh Government would not be drawn on any details but has confirmed it plans to establish the service. Its forthcoming Programme for Government will “focus on next steps,” a spokesperson said.

What form the service will take is still unclear. Developing a national plan that key stakeholders will sign up and adhere to will be an important first step to ensuring the consistent provision the country seeks.

The feasibility study concluded there was “strong support” for a national coordination and strategic integration – a costly route for the Welsh Government and an unpopular option among many music educators and professional organisations.

These groups have been working with the Department for Education to tackle inequalities.

Music Consultant Dinah Pye, who led a petition for a National Plan, believes consensus is building on a way forward.

“There are those who think a National Service will be a centralised one,” she said.

“That is not on the cards at present. The plans under discussion are based on the local need and delivery that exists, and how that might be eased into the new education curriculum for Wales.”

“A number of strong, independent organisations are already delivering high quality services in different parts of Wales and collaborative conversations have been taking place about how they can work together to enable a more equal provision."

“As far as we are aware no one is pushing for it and the people delivering services on the ground don’t want it.

“But there is an argument that coordination at regional level might bring economies of scale because some local authorities are very small and don’t have the money to develop a strong infrastructure.”

Former Minister for Education Kirsty Williams, a passionate advocate music in the curriculum, stepped down at the recent elections, leaving new minister Jeremy Miles to deliver the National Music Service.

The pledge could address persistent variability in the availability, affordability and take up of music in schools and boost the glacial pace of progress.

Little has changed since 2015, when a report revealed music in schools to be a “postcode lottery”.

In areas such as Gwent, a comprehensive music service is still run by the local authority; in Powys, where the county council’s service was withdrawn in the late 90s, it is up to individual schools to decide on music tuition.

The report said the “attitudes and priorities of school leadership teams” often determine whether students receive music tuition, and many view instrumental and vocal lessons as an optional “add-on”.

While England’s Music Education Hubs are supported by a ringfenced £76m fund, central government funding in Wales is negotiated by the Welsh Local Government Association and distributed through increasingly squeezed local authority budgets.

Conwy Council told a 2018 inquiry that its “cost neutral” music service tuition charged schools £42 per hour: “All but one primary school charge parents and most pass on the real cost,” the authority said.

“A growing number of pupils quit because they can’t afford it and we don’t know how many never start in the first place due to charges.”