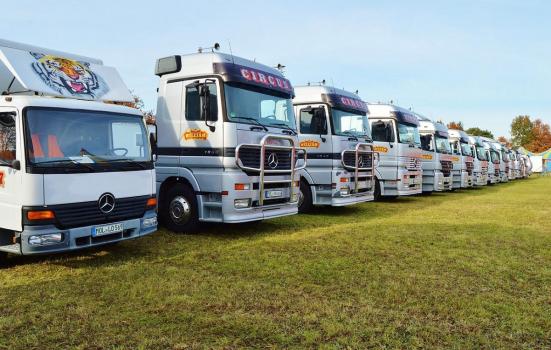 Plans for a short-term licence to allow European cultural touring in the UK need to be pursued now, UK Music says.

The Department for Transport (DfT) has proposed to table legislation for dual registration of specialist events hauliers that have bases in the UK and EU, suspending for a small number of operators the post-Brexit restrictions that limit UK tours to two stops within a single country.

Industry pressure group LIVE, which lobbied for the accommodation, estimates up to 110 European tours at risk due to cabotage restrictions will be able to take place under the licence.

A DfT spokesperson said: "We are taking unilateral action to allow specialist event hauliers who maintain operating bases in both the EU and Great Britain to temporarily switch their vehicles to a UK operator licence, enabling them to conduct the UK leg of tours this summer."

The department expects, at a "conservative estimate", £300m worth of equipment hire sales for the UK production sector as a result.

Changes were initially slated for August, but DfT did not answer questions this week about a timeline for implementation or how long the allowance would last.

He added: "We ultimately need a long term solution that recognises the unique nature of cultural touring between the EU and UK without barriers."

“The Government must urgently bring forward any new legislation to enact this interim measure before the summer season commences."

'Not a silver bullet'

Only a handful of larger operators already working across the Channel are expected to benefit from the new "Great British Operating Licence".

DfT said the proposal will "ensure that our world-leading creative and cultural artists can continue to tour widely" because EU-registered vehicles could take advantage of movements permitted between member states - not a new development.

But it does mean dual registered companies wouldn't have to change vehicles at the border because they can use EU approved trucks here.

The cost of establishing a European bureau, however, is out of reach for most. Any EU base of operations must be legitimate, a February consultation on the proposal states, domestically registered and locally compliant.

The proposal has no impact on arrangements for the tours themselves. Visas are still required for touring artists in seven of the 27 EU member states following a deal with Spain in November.

In its submission to the consultation, UK Music said dual registration would be "a useful stopgap, but it has drawbacks and is not a silver bullet".

"We would emphasise that this measure needs to be paired with a short-term easement of cabotage rules for event hauliers... to cover the summer season that is already under way."

UK events may face a decline if DfT's plans don't go ahead, UK Music has warned.

There is a shortage of specialist event hauliers now that could become more acute by summer, particularly over the peak festival season. Larger tours are likely to eat into the supply of available vehicles, potentially causing small and medium sized tours to cancel.

"As we saw last year there are limits to what can be achieved if the supply of drivers and vehicles is restricted. Therefore, allowing as many of the trucks that have moved across to Europe to return as easily as possible is vital," its consultation submission notes.

Brexit has encouraged "large parts of the UK haulier fleet to relocate to Europe", it adds. The Republic of Ireland and the Netherlands have supplanted the UK in the specialist haulage market.

If used long term, dual registration could disincentivise companies from basing themselves in the UK because it's easier to use EU vehicles, and spark a loss of work opportunities.

"We have repeatedly warned elsewhere that the transfer of trucks to the EU will, in the long term, have negative consequences for the UK based live sector, and it will undermine the UK’s currently hegemonic position in the events haulage sector in Europe," UK Music said.

"Dual registration will smooth some of the negative consequences of that decision in terms of access to trucks and facilitating touring but it will only reinforce that fundamental trend."