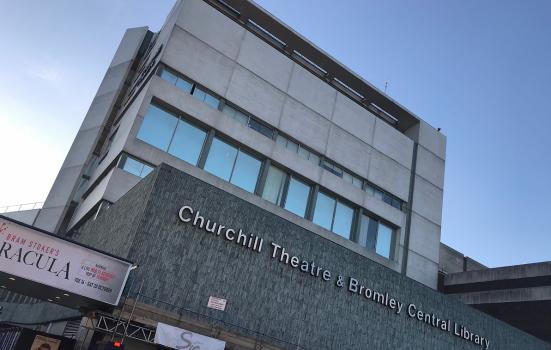 Churchill Theatre, Bromley, is now one of 11 venues in the Trafalgar Entertainment portfolio

HQ Theatres is contracted by local authorities to run 11 venues across England, which will now become part of the Trafalgar Entertainment portfolio.

Qdos Pantomimes, the panto production arm of Qdos Entertainment, is not part of the acquisition and will be unaffected by the changes.

Russell described the deal as “a vote of confidence for our business and for the sector as a whole”, saying the new partnership will “help to fast-track our recovery plans and offers a range of exciting opportunities for the development of HQ Theatres in the future.”

Trafalgar Entertainment was co-founded by Sir Howard Panter and Dame Rosemary Squire in 2017.

The HQ Theatres acquisition places them in competition with Ambassador Theatre Group (ATG), the world’s biggest venue operator, which they founded in the 1990s. The pair stepped down from ATG in 2016.

Until now though, it has controlled only two venue spaces, both through acquisition. The Grade II listed West End venue Trafalgar Studios was due to reopen this spring under the new name Trafalgar Theatre following a multimillion-pound restoration project. Australia’s Theatre Royal Sydney, acquired just last year, has also undergone a major upgrade and is due to open in August.

The new regional venues will fill a significant gap in its portfolio of activities across the entire theatre distribution chain, providing venues for its work across England as well as new opportunities and economies of scale.

Trafalgar Entertainment has also taken a lead in livestreaming by acquiring Picturehouse Entertainment – now Trafalgar Releasing – which broadcasts live productions worldwide, from its own production company and others including the Royal Shakespeare Company, Glyndebourne, Coldplay and The Met.

The pandemic could be the catalyst Panter and Squire need to rapidly grow their new venue network.

The perilous financial situation of some theatres is likely to pave the way for commercial operators to take control as local authorities – and potentially others – look for more sustainable ways of reopening venues on stretched budgets.

While well-resourced multi-venue operators say they are doing better than expected through the pandemic, experts are warning that smaller or less experienced lone operators lacking financial insulation will find it harder to weather the storm.

The latest council to announce cuts to its arts provision is Basingstoke, where the trust that runs the Anvil and Haymarket theatres has been given 90 days’ notice of a 50% funding cut.

In Nottingham, City Council funding for Nottingham Playhouse is due to be cut by 15% after proposals for a 37% cut were withdrawn following a public consultation.

In Peterborough, not-for-profit operator Vivacity handed back control of its loss-making enterprises, including the Key Theatre, to the city council in June.