The V&A Director warned against getting “too romantic about what Stratford was like before the Olympics”. 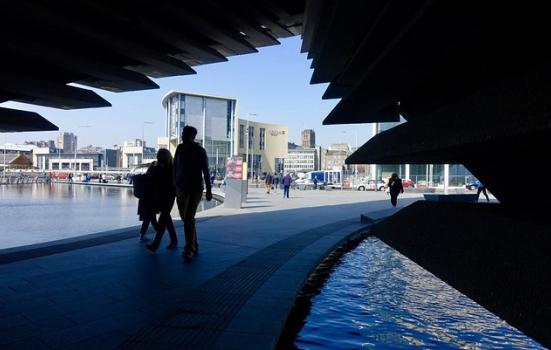 Last week AP reported on Tristram Hunt’s lack of interest in providing a dedicated prayer space at the planned new V&A museum in East London, despite its location in an area with one of the capital’s largest Muslim communities. His comments generated plenty of debate on Twitter, including one tweet suggesting we “stop giving privileged white men museum director positions”.

Hunt has since ruffled feathers again by writing an article in last weekend’s Observer newspaper, where he questioned increasing calls for museums to return objects in their collection obtained through colonialism.

The former Labour MP is evidently willing to engage robustly with the challenges that come with leading a major cultural institution. Here are three more comments he made at a recent event in London that reflect his views on cultural inclusion:

Looking back to the opening of V&A Dundee last year, Hunt said: “This is the result of centre ground politics [at] work. This is the result of a coalition between the Scottish National Party, the Labour Party, and a Conservative UK Government actually delivering real outcomes for people, as well as £15m of extra regeneration in the heart of the city. So before we beat ourselves up too much, art delivers wealth and prosperity and regeneration, and it continues to do so.”

He continued: “We are hoping to achieve something similar in Stratford as part of the Queen Elizabeth Olympic Park… Many of you will know Stratford. Stratford suffered from de-industrialisation and the effects of decolonisation in the sense of the docklands industry. And then it was transformed through the Olympic opportunity. And again, before we get too romantic about what Stratford was like before the Olympics, there were a lot of mountains of fridges and burnt out double-decker buses in this part of London. Again, regeneration and art come together and transform places and opportunities for people.”

2.  On opening up stored museum collections

Hunt also gave a forthright response to critics calling for more public access to the museum’s stored items. Introducing the collections and research centre that will form part of V&A East, Hunt said “you will be able to walk through the V&A reserve collection. So all of that rubbish we always have to put up with, which is ‘where’s it all hidden?’. Well now you can go and see where it’s all hidden and see it for yourself. So (we’re) opening up the collection in a remarkable new way.”

Hunt said that at the new collections centre, V&A East hoped to display some of the brutalist architecture it had collected from Robin Hood Gardens – a housing estate in Poplar, East London which is being demolished.

He defended the museum’s decision to collect this material in the face of criticism from both left and right, saying: “We wanted to collect that great example of brutalist architecture, because it was being destroyed.”

Hunt explained: “The right said ‘Well this is a grotesque waste of money, because brutalism is a failed social experiment, that’s why they’re knocking it down, so why are you doing this.’ That was alright, we could deal with that because we collect for the long term and what’s not popular now can be popular in the long term and it has an important architectural significance.

“And the cultural left said: ‘Well you are artwashing gentrification. You are complicit in the dislocation of the residents of this housing estate’. Leave aside the fact that the majority of residents said it should be bulldozed.

[People argued] that somehow being involved in that cultural act in that community, of collecting for the long term as a cultural organisation, was problematic.”

Hunt acknowledged that V&A East posed complex issues for his organisation. Explaining the motivation behind the project, he said: “This is a relationship not only with local communities and schools, but also the creative ecology of Hackney Wick and the East End, and it’s also incredibly local. To go to the point of ‘why are you doing this, what are you about as a cultural institution, why are you here?’ We’re here, and we’re there, because this is the most diverse, the most fast-growing, in many ways the most interesting part of London.”

He added: “We’re working with local schools, local community groups – and we’re wrestling with this complexity of this civic function, community engagement and the impact of a major cultural institution coming in”.