Theatre-goers are fewer but more active than previously thought

Nearly a quarter of UK ticket revenues are generated by just 2.5% of customers, and over 2m so-called theatre attenders have lapsed, according to ground-breaking research. 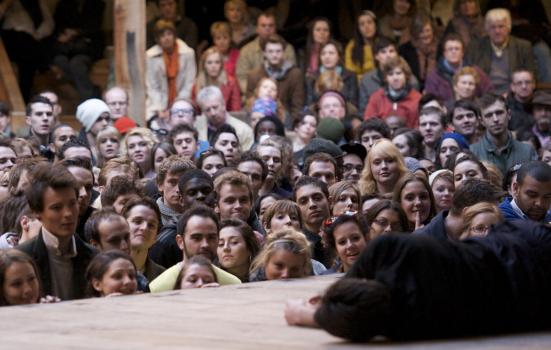 'Groundlings' at Shakespeare's Globe Theatre enjoy a performance from the yard
Photo:

An in-depth analysis of box office data across the whole of the UK has for the first time revealed the full extent of audience cross-over between different venues, and implies that arts organisations are dismissing millions of customers as being ‘inactive’, when in fact they have switched their allegiance to other arts providers.

The study, which used data from the 30 months of transactions leading up to June 2013, shows that estimates of the number of attenders at UK theatres could be overstated by as much as 40%.

These figures are reported in ‘It’s Theatreland – but not as you know it’, compiled by data experts Purple Seven, who de-duplicated box office records across 232 venues in order to draw out the findings. This is the first ever report to examine ticket booking patterns across the nation as a whole, rather than on a venue-by-venue basis.

The company believes that around half of all key UK arts venues, including the very largest organisations, are represented in the study, which is estimated to cover over 70% of all UK ticket sales.

Purple Seven Director Stuart Nicolle told AP: “Whilst this isn't a full census of the UK arts attending market, it is a robust and representative sample that has enabled us, really for the first time, to fully understand the attendance dynamic of the industry.”

13m customer accounts are held in the box offices of the venues involved in the study, but the analysis has shown that because of audience cross-over, these accounts relate to only 7.8m individuals.

4.7m of the accounts are registered to people who theatres believe have not attended in the past 18 months, but in reality only 2.3m of these accounts belong to genuine ‘lapsed attenders’: the rest have lapsed at one or more venues, but continued attending at others, and the report comments “That’s 7% of the entire market written off, when they are actually active.” At the other end of the scale, whilst venues identify around 58k people as being ‘super attenders’ –  those who attend ten times a year or more – the true figure is almost 199k.

The whole market for theatre tickets is found to be hugely influenced by major bookers, namely ticket agents, ‘boutique bookers’ such as hotel concierges buying tickets for their clientele, and large parties including work trips and school groups.

Nearly £230m of the total £1.5bn worth of tickets were sold through these routes, though the bookings for these tickets were made by only 0.6% of all customers, and the report comments: “How we as a sector engage this small group of ‘customers’ must be different to the rest as they are not ‘normal customers’.

Venues and production companies must also ask whether we’re happy letting this 15.7% of the value of Theatreland flow through third parties, rather than in a direct relationship with the customer.”

In conclusion, the report points to implications for theatre marketers, and says that there is much more that could be done to improve customer engagement: by encouraging existing customers to visit just 10% more, “the size of the prize for Theatreland is over £200m.

To realise that size of the prize, we – as a sector – have to have a serious conversation about how we engage customers. Do we continue to work in silos and see customers as individual accounts – risking irrelevance because we don’t understand their true behaviour? Or do we work together as a sector to develop our customer understanding and engagement to be relevant and effective, thus growing the whole sector?”