Private funders are increasingly interested in supporting new business models and the cultural workforce, growing their aid in response to Covid-19. 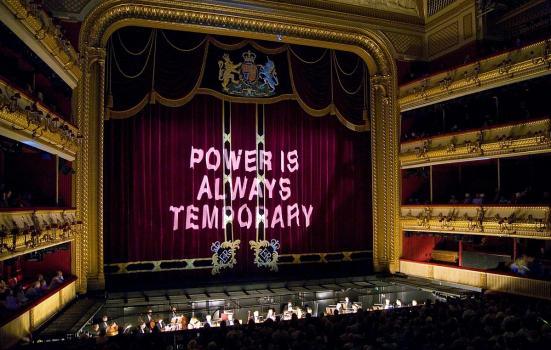 A Martin Firell projection at a trust-funded production at the Royal Opera House
Photo:

Ten arts organisations received more than £25m from trusts and foundations in 2019/20, 28.5% of the value of grants from these sources.

A new report into trusts' and foundations' arts funding highlights their crucial role in the cultural funding ecology, providing 10% of income to the average UK arts organisation.

The Arts Funders Group, a collective of 19 independent trusts and foundations, granted about £88m to the sector in 2019/20. This contribution "will become even more important as organisations look to recover from the impacts of Covid-19 against a backdrop of stretched public funding," John Ellerman Foundation Director Sufina Ahmad said.

While figures for the year of the pandemic are not yet available, support during the current financial year may be higher still: the Paul Hamlyn Foundation, as an example, increased its funding in response to the pandemic, establishing a £20m emergency fund in April 2020 and awarding 412 grants.

Nearly a tenth of all funding from trusts and foundations went to one organisation: Snape Maltings received £8.37m in the last financial year.

The Museums Association was also a high earner, drawing on more than £4.1m in private grants.

These large investors are among a growing number that prioritise engagement and learning work, widenening audiences and championing the value of arts and culture to society. Two-thirds of trusts and foundations articulate at least one of these priorities, the report notes.

Just over a third prioritise organisational development, including new business models, and just under a third are focussed on supporting the cultural workforce and increasing its diversity.

While most private income was directed to organisations, this may change amid a greater awareness of the challenges facing freelancers.

A Paul Hamlyn Foundation spokesperson said it will likely continue last year's approach of spreading its Awards for Artists among a larger number of eligible candidates in 2021.

The report indicates the organisations that receive the most from trusts and foundations are also those drawing more from public and other sources.

95% of grantees received £300,000 or less from these sources and half received awards of less than £50,000, but a small minority of organisations received up to £10m. Just 11 grants of more than £1m were made to arts organisations in the last financial year.

Those who earned the most from trusts and foundations often received multiple awards. When awards were larger - more than £2m - they generally accounted for a smaller proportion of the organisation's overall funding.

The report notes that larger organisations "typically have a lower proportion of income from trusts and foundations, which may reflect [a] wider mix of income streams and more capacity to generate earned income".

"Trust and foundation income, whilst hugely significant, sits alongside far greater investment from the public sector."

London relies most heavily on private income: arts organisations there derive a fifth of their finances from donations, sponsorship, fundraising, and trusts and foundations.

The capital received more than a third of grants from trusts and foundations in 2019/20 and 41.8% of total funding.

Organisations there get more of their income from trusts, foundations and bequests than other regions do - 12.8% - although the gap is perhaps lower than expected, with the South East of England receiving the lowest proportion (7.8%).

Among art forms, music organisations received the highest number and value of awards - a quarter of all funding.

Literature drew the highest proportion of its income from trusts and foundations at 17.2%; museums had the lowest at 4.8%.