Tell us how to do better, says culture lead for Nine Elms regeneration

Michelle Walker said she welcomed ongoing dialogue with residents as she takes on responsibility for culture in a project that will see the creation of 20,000 new homes. 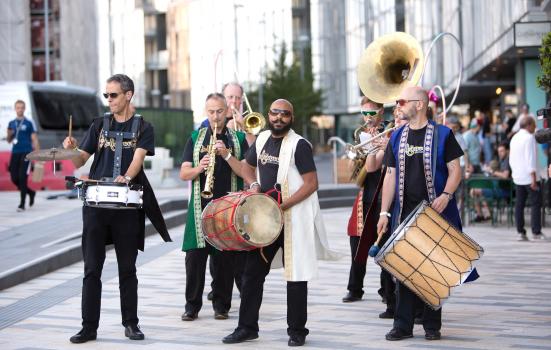 Residents and artist communities affected by major regeneration plans on London’s South Bank have been urged to maintain constant communication with the team directing culture, even if that means telling them “where it’s not working”.

Michelle Walker made the comments to AP as she prepares to take up her new role as the new culture chief for Wandsworth Council’s Nine Elms regeneration project, which will see 20,000 homes, as well as retail and business facilities, built in a former industrial space that straddles the boroughs of Lambeth and Wandsworth.

Walker, formerly Artistic Director of Hat Fair, Winchester’s outdoor arts festival, and Executive Director of Greenwich and Docklands Festival, will be tasked with “threading” culture through the development’s strategy, in areas ranging from planning to business.

Explaining her reasoning for taking the new role, Walker told AP: “It felt like a really exciting opportunity about how you can be part of facilitating the contribution culture makes in a really long-term way in a place, as opposed to the joy of popping up for a few days and making something extraordinary happen and waiting for the next time your cultural activity can be part of the landscape again.”

The “last remaining industrial stretch of the South Bank” is being regenerated by Wandsworth and Lambeth councils. It will see an extension of transport links and the promised creation of 25,000 new jobs.

A spokesperson for the council said the cultural strategy and events programme for Nine Elms aims to raise the profile of the area and make it a “world-class urban neighbourhood”.

Walker was unable at this point to provide specifics about the nature of upcoming activities, but said her role would use culture to give the area a sense of identity – the “shiny, profile-building role” – as well as fulfilling a more “rooted” job of “offering opportunities to communities, residents, businesses and enterprises and anyone who feels like it’s their place because they live and work there”.

“How does culture offer opportunities for those people and play a role in the complicated changing urban dynamic – which is inevitable when you’ve got long-term existing communities in an area that’s changing very rapidly,” she asked.

She said that the project will aim to work with galleries currently in the area, as well as attracting new arts organisations to set up temporary or permanent bases.

“Space is at such a premium in big cities and making best use of that space while it is in flux is something the arts sector does brilliantly.”

Recent research on urban cultural districts found a general concern about local community interests being “drowned out” by the those of local governments or property developers, and concluded that such areas must remain collaborative and democratic to stave off the threat of gentrification.

But Walker stressed her belief that stakeholders involved in the Nine Elms project were committed to using culture in a way that went beyond mere decoration.

“I think what I’ve been heartened by is the appetite for culture that’s been demonstrated. The fact that [strategy] conversations at the council include someone with a cultural remit shows a commitment to me that has to go above and beyond a sort of glossy sales pitch.”

She pledged to build on her work in using art events to create welcoming places and to fight for culturally and demographically rich communities.

“One of the things that makes cities wonderful places to be, and to thrive, is the diversity of communities that live necessarily cheek-by-jowl with each other because of the density of the urban landscape.

“Nobody wants to live in a sterile city and no one want to work or visit a place that doesn’t feel like it’s alive or for everybody. We want welcoming public spaces and they only feel welcoming if they’re for everybody.”

She said that the pattern of who funds and invests in culture is always shifting, pointing out that private developers are increasingly partnering with local authorities, funders, charities, and grant-making trusts. “Just as the communities that inhabit a place are naturally diverse, it makes sense that the funds that support them come from a diversity of sources,” she said.

Walker acknowledged the difficulty of balancing the many interests involved, but said that it would help to have “someone in the mix with their elbows out battling for culture”.

“I welcome continuing dialogue. We’re only going to stand a chance of succeeding if people feel they can continue the conversation, even if it involves people telling us where it’s not working for them – otherwise we won’t be able to listen or work on that or tackle it and get it right.”