Strategy to put Gloucester 'on the cultural map'

Signature events, including a potential UK City of Culture bid, will "signal the cultural regeneration of Gloucester". 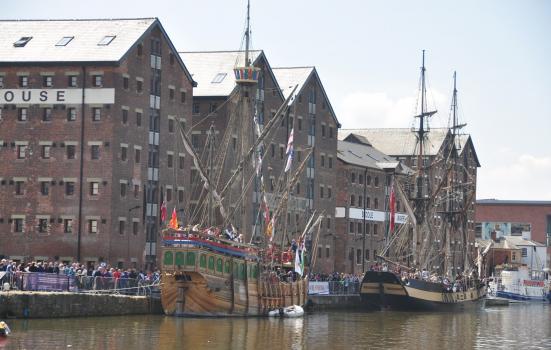 A new strategy aims to "put Gloucester on the cultural map" by investing in high profile events, including a potential UK City of Culture bid.

Signature events will raise the city's status as a tourist destination, inspire its cultural sector, and act as "beacons to signal the cultural regeneration of Gloucester".

Bigger investments in new and existing cultural infrastructure are central to the mid-point refresh of Gloucester's Cultural Vision and Strategy 2016-2026, currently under consultation.

Less ambitious than York's, the strategy nonetheless presents a comprehensive plan to build on local creative and cultural assets to achieve wider social and economic goals.

"We are committed to making Gloucester a better place to live, work and play," the draft strategy document says.

"Gloucester will be known for its distinctive culture, which will be innovative and excellent, quirky and edgy, diverse and community-based with a strong focus on young people."

Culture at the centre

The strategy update, which was first considered pre-pandemic, aims to integrate cultural strategy into future regeneration plans and create an aligned "one city approach".

The key to this is getting culture's "tentacles" into every aspect of city life, Gloucester City Council's Head of Cultural Services Philip Walker said at a feedback session on Wednesday (December 16).

He said it was important to consider the role culture would play in helping the city "move through" its post-Covid recovery, and whether that should be reflected in the strategy's much longer-term outlook.

Dean of Gloucester, The Right Reverend Stephen Lake, said many organisations were "stumbling from situation to situation" and unable to plan six months out, let alone five years.

"The words 'vibrant' and 'city centre' may not appear anywhere right now."

Others questioned the strategy's focus on developing city centre spaces like King's Square, saying there was a "disconnect with the city centre and other areas of the city" that should be ameliorated.

A potential UK City of Culture bid drew mixed responses from attendees on Wednesday, who felt the city may not be ready for such a major event and should instead focus its resources on implementing the bulk of the new strategy.

"I'm one of those who thinks we should go for it wholeheartedly or not at all," Dean Lake said.

Walker, of Gloucester City Council, said the authority had not yet made up its mind.

"The city council's position on this is not wait and see, but that if the conditions are right for the city and a City of Culture process would not bankrupt us... then it would probably naturally fit with the cultural strategy.

"If it's going to cost us as lot of money it's not quite right for Gloucester, then it's not something we should pursue."