Storm brews between University and Arts Centre in Aberystwyth

Aberystwyth Arts Centre’s Director and Operations Manager have been suspended but the University denies the Centre is at risk. 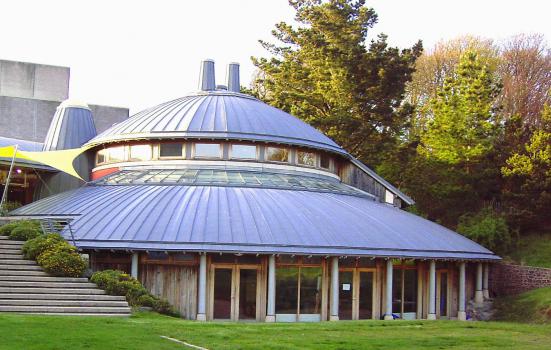 Aberystwyth Arts Centre (AAC) is in the spotlight amidst allegations that heavy-handed restructuring by its owner, Aberystwyth University, will lead to “asset stripping” of a public arts resource that was built up from public money. The Centre’s Director, Alan Hewson, and Operations Manager, Auriel Martin, have been suspended, reportedly because police were called when a four-month-old baby was allowed to enter the Centre with its mother during a rave. But a petition for their reinstatement has gathered over 1,000 signatures in just three days as speculation has grown that “the pair have been suspended to put them ‘on ice’ while the university's plans for the future of AAC are developed.”

AAC, which is Wales’ largest arts centre, is a department of Aberystwyth University and is at the heart of its campus. The University is remaining resolutely tight-lipped about the suspensions on the basis of staff confidentiality, but in a statement to University staff, Vice Chancellor Professor April McMahon dismissed the suggestion that there are plans to “radically change its use to alienate or exclude any member of the community.” However, she goes on to admit that the University is looking for ways for “improving the use of space which would otherwise be standing empty”, suggesting that there is plenty of scope to use it for more teaching, student activities and staff meetings. A public statement has been issued, saying: “The University is disappointed and saddened by the various messages circulating which seem intended to increase public concern about the future of our excellent Arts Centre.” The Arts Council of Wales (ACW), which provides AAC with revenue funding of £560,000 a year and has invested over £3m of Lottery capital funding in its buildings, has been “very concerned” about speculation on the future of the Arts Centre, but has been given a clear assurance by the University that there are no plans to reduce or dilute the future artistic programme. ACW will “continue to monitor the quality and the range of the Arts Centre’s artistic output”, and a spokesperson told AP: “We expect the Arts Centre to continue its commitment to supporting the programme of professional and community activity that between us we jointly fund. Of course, the Arts Council’s revenue and Lottery funding to the Arts Centre depends entirely on the continuation of the programme at the level we’ve agreed… and any change in activity would mean a review of funding levels.”
Others feel less reassured about the future for AAC, particularly in the absence of its longstanding and well respected senior management team. Dave Bradney, one of those who signed the petition for their reinstatement, said: “The input of Alan Hewson's team would be crucial to the formulation of any viable plans for the future of AAC – not just in the consultation phase but even more so in the drafting and development phase prior to consultation. To proceed without this input would be negligent and almost bound to result in damaging blunders which could harm the future of a major public resource in mid-Wales.”

Roger Tomlinson, who was ACC’s first Director when it opened in 1972, told AP: “Even at the beginning there were tussles with the University, which took the funding from the Arts Council and local authorities – it does today – but was reluctant to recognise the ‘public benefit’ obligations of capital and revenue grants which could not normally be given to a university. Alan Hewson, in particular, and his team and have done a fantastic job over decades and deserve support, not disruption. We need the Arts Council to defend their long term investment. From my recent experience with the University, it is hard to trust them with something as important as this. ACC should be run by an independent trust in these uncertain economic times.”