The Milton Keynes venue says new plans to build 79 houses nearby present a “real threat” to its future. 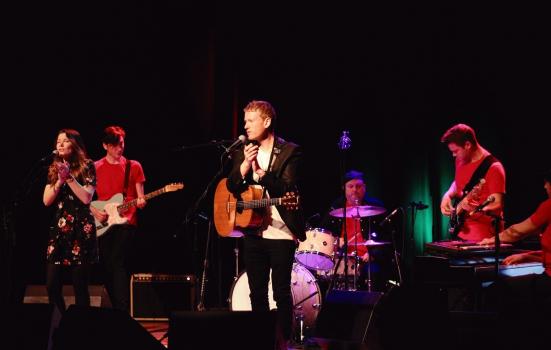 Teddy Thompsonn on stage at The Stables
Photo:

An arts venue in Milton Keynes is facing a renewed threat from a nearby housing development just months after a decision by the council’s planning department had appeared to resolve the situation.

Music venue The Stables has said that a new planning application by Abbey Homes presents “a real threat” to its future. The developer wants to build 79 houses on a section of a site it owns to the west of the centre. The venue, which hosts over 350 concerts a year, was founded in 1970 by Sir John Dankworth and Dame Cleo Laine.

A previous application by Abbey to build 134 houses on the site was approved on the understanding that noise reduction measures would be incorporated and a ‘deed of easement’ would be entered into between The Stables and the developer.

This followed campaigning by The Stables that led to more than 3,000 objections to the plans from the public.

The deed would enable The Stables to continue to make noise as an entertainment venue. It would also mean that any future residents of the homes would have a legally enforceable right to know about any inconvenience that they might experience by living near the venue.

However, The Stables told ArtsProfessional that despite contacting Abbey’s managing director with a view to “taking forward the deed of easement discussions”, there has been “no response to the contact from The Stables or our solicitor”. Instead, the developer has submitted the new application.

Monica Ferguson, CEO and Artistic Director of The Stables, said: “This new reserved matters application for half of the site is a real threat to The Stables. If approved, the previous reserved matters approval falls away along with the conditions we fought hard to secure including the deed of easement, acoustic fencing and appropriate glazing.”

The venue is asking the public to write to Milton Keynes Council expressing their concern about the application. For comments to be considered they need to be submitted by 19 June.

A template objection letter has been drafted which states there is “no credibility to the application given the lack of information on noise monitoring or prevention and no mention of the sensitivities of the site given the proximity of The Stables and its car park”.

It urges the council to “reject this planning application outright”, and adds: “Nationally there is grave concern about the number of music venues being forced to close because of complaints of noise nuisance from new neighbouring residential schemes, forcing licensing constraints that make the venues unable to conduct their established concert programmes.”

The Stables has also launched a ‘Save The Stables!’ petition, calling on the council to reject the application, which has so far attracted more than 10,000 signatures.

A spokesperson from the Music Venue Trust, which lobbied Milton Keynes Council on behalf of The Stables during the previous application process, told AP: “This case has been handled with exceptional sensitivity and thought by Milton Keynes Council so far, and we hope they will continue to act in the best interests of existing local residents, the venue, and future potential residents of this proposed development.

“The developer, meanwhile, seems determined to build accommodation which will suffer from noise, and has made no effort to address perfectly reasonable concerns raised in over 3,000 objections to this development.

“The whole purpose of the amendments to the National Planning Policy Framework made by central government in 2017 and 2018 were to support developers to make good, informed decisions about the sort of protection they need to provide when building near to a grassroots music venue. We'd strongly urge this developer to read that guidance and come back with adequate and sensible plans.”

ArtsProfessional approached Abbey Homes for comment but at present has received no response.