Southbank Centre is withholding its Festival Wing planning application to allow time for an alternative funding solution to be found. 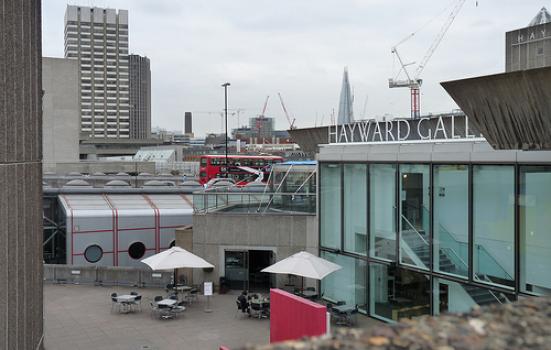 The Hayward Gallery is one of Southbank Centre's buildings which requires refurbishment.
Photo:

The Academy of Urbanism via Creative Commons (cc by-nc-nd 2.0)

Southbank Centre has announced that its £120m development plans are now in limbo following Mayor of London Boris Johnson’s recent insistence that the development “should not be at the detriment of the skate park which should be retained in its current position.” The Centre had planned to achieve commercial income for the refurbishment of its 1960s buildings, the Queen Elizabeth Hall, Purcell Room and Hayward Gallery, by moving the skateboarding site to make way for restaurants – a model of commercial partnership which proved successful during the redevelopment of the Royal Festival Hall. The planning application will be held back for three months to give the Board time to find an alternative funding model that will enable the redevelopment scheme to go ahead. Whilst the Mayor claims to support the overall ambition of the Festival Wing scheme and to understand the funding challenges faced by Southbank Centre, he has the final say in the planning process and planning permission is unlikely to be obtained without the retention of the skate park.

Rick Haythornthwaite, Chairman of Southbank Centre, said: “This is a big setback to a scheme which would serve millions if completed. The case for closing the project down right now is compelling but we feel we owe a last ditch revival attempt to the many people that have supported us over the past four years of planning, not least the Arts Council England. Boris Johnson and Lambeth Council have both made clear that they wish to see the scheme proceed and we look forward to hearing their ideas... We have been handed a massive challenge and we don’t yet see how we will make it work – it is not as if we haven’t already explored numerous options... If we are to have any chance of finding new answers then we need, over the next three months, the help of everyone with an interest in putting the final touches to a world class South Bank cultural quarter. If we all fail to find a solution, the buildings problems do not go away. But the needs of the new people attracted by our success over recent years would have to wait to be met until a yet more radical solution to this hitherto intractable problem emerges.”

Southbank Centre announced its plans for the Festival Wing in March 2013, which included the refurbishment of the Queen Elizabeth Hall, Purcell Room and Hayward Gallery complex as well as the addition of a glass pavilion to accommodate new arts and educational spaces. As part of the proposals, a new skating space was planned for under Hungerford Bridge, 120 metres away from the existing undercroft, to make way for restaurants, but a petition signed by 27k people campaigning to save the undercroft skate park sparked Johnson’s intervention.

This is fantastic news. I am an arts professional - senior roles for the last 15 years - but I truly believe this is great news. The whole basis of these plans seems to have been taking the public out of the Southbank and putting money at the heart. The skaters add a reality to the place. The Southbank should be seeing the skaters as 'partners' not the enemy. Why not put the restaurants 'only 120 metres away'. Because then Southbank, who want posh money in the area to attract posh custmers lose out and they will still have the 'scruffy skaters making the place look untidy'. The Southbank has become a playground for the rich and the elite, with only a few token options available for free or below £10.00. It is common for tickets for shows to be sold out to members before any of the public can book. It has become a private members club for the elite in London. Hooray for the skaters and their truly wonderful skills that attract and inspire so many