DCMS and the University of Bristol publicised the research findings as proof that 'singing is no riskier than speaking'. That's not quite what the study says. 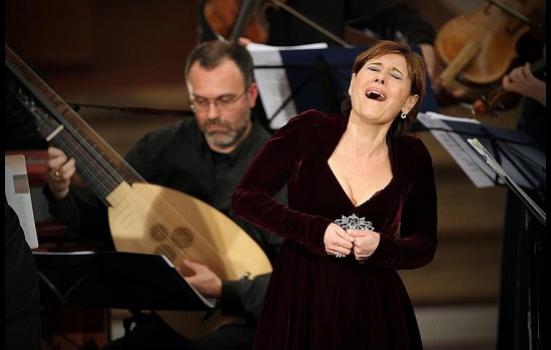 Sopranos sing at a volume of up to 100 decibels, which is enough to increase the risk of spreading coronavirus

A study into the risk of coronavirus infection via singing has concluded that volume is more influential than the style of vocalisation.

University of Bristol researchers asked 25 professional singers to sing Happy Birthday and breathe, speak and cough into a 3D-printed funnel at different volumes to monitor the amount of potentially-infectious aerosol particles they expelled.

They found "steep increases" in the amount of aerosols released as the singers' volume increased.

But at the loudest volume of 90-100 dbs - as loud as a lawnmower or garbage truck - there is a statistically significant difference between speaking and singing, with singing producing between 1.5 and 3.4 times as many aerosols.

Singing volumes can range from about 70 dbs to more than 100 dbs for trained opera singers.

The university and DCMS touted the findings of the yet-to-be-peer reviewed study as proof that "singing is no more risky than talking," which is not accurate.

What the study, titled PERFORM, did find was that the "relatively modest differences" between singing and speaking at the loudest volume "are eclipsed by the effects of volume".

Loud singing and speaking produced up to 30 times more aerosols than the same actions at the quietest volume.

The study has given new hope to musicians, with DCMS updating its guidance to reflect the findings.

They tally with other domestic and international research that suggests volume and ventilation are key safety considerations for performing during the pandemic.

Culture Secretary Oliver Dowden said the research showed "there are no heightened risks" associated with singing: "This means people can get back to performing."

The PERFORM study authors suggest amplifying singers' voices as a possible practical solution to performing at a lower volume.

They said public health bodies should centre their guidance on volume, ventilation, the number of performers and the length of performance activities.

"Given that it is likely that there will be many more audience members than performers, singers may not be responsible for the greatest production of aerosol during a performance, and for indoor events, measures to ensure adequate ventilation may be more important than restricting a specific activity," the study says.

The Incorporated Society of Musicians (ISM) welcomed the research but said musicians still may be unable to work with social distancing measures in place.

Chief Executive Deborah Annetts said: "Unless venues are supported to address the specific problems relating to ventilation raised by this research, both small, grassroots and world-renowned heritage venues will be disproportionately impacted."

"With many venues likely to remain closed as a result, freelancers will not be able to earn a living through live performance."

The study says that some individuals generate significantly more aerosols than the median: "This is particularly apparent for breathing, where measurements from individuals span almost three orders of magnitude."

"However, the highest emitters were not consistently the highest across all activities, suggesting the magnitude of emission from an individual may be highly activity specific."

The study said "it is unclear why some participants emit substantially more than others" and that further studies are needed to understand the variations across the population.

The risk of contracting coronavirus is also dependent on the performing environment.

PERFORM, conducted in an orthopaedic operating theatre, had a "zero aerosol background" but this will not be the case for venues that are now reopening.

The difference in the likelihood of infection by airborne aerosols compared to larger 'droplets' is not well understood; although scientists have suggested aerosols are more dangerous because they can linger in unventilated spaces.

However, "particle composition and environmental properties like temperature, humidity and airflow" influence the mechanics of the aerosols or droplets released and how far they travel, PERFORM notes.

It says that measuring the concentration of particles alone wouldn't determine how much infectious material is being transmitted, and that the total mass of particles produced may be more important in assessing the potential risk.

Friday, 17 September 2021
Birmingham 2022 has released details of the six-month festival set to run across the West Midlands as part of the Commonwealth Games. The £12m festival will showcase art, photography, dance, theatre... read more