Venues can open as places of work, Culture Secretary says as income supports are extended. 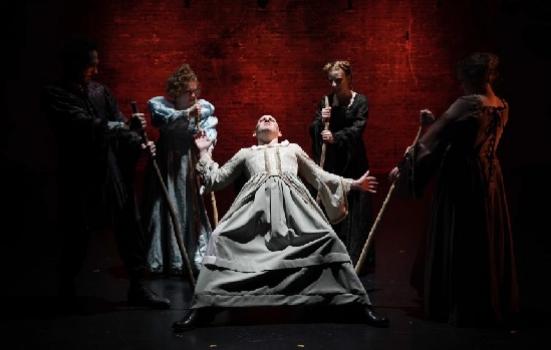 The new lockdown is "a body blow" to theatres and other arts organisations, Equity says.
Photo:

Arts organisations can open for rehearsals and to stream live performances, but audiences are not allowed, the Culture Secretary says.

Oliver Dowden took to Twitter on Monday night to clarify the rules for the sector as England heads into a second national lockdown on Thursday. Because arts venues are places of work, "people can come into them for work if it cannot be undertaken from home," Dowden said.

The clarification was a ray of light to professional organisations, which had expressed their deep disappointment and pain at another costly U-turn in the Government's coronavirus policy.

A flurry of statements called news of the upcoming lockdown "devastating".

Though he noted the "absolute necessity of protecting lives at this critical time", Theatres Trust Director Jon Morgan said the lockdown will inflict further damage on a sector already under pressure.

Allowances for training, rehearsal, pre-production and streamed performances will be "a huge relief" to organisations planning December shows, he said.

"In order for theatres to be ready to open in December, it is vital that the sector has suitable advance notice of the confirmed reopening date.

"Theatres will need to further delay their reopenings and many will still be unable to do so viably under the three-tier system."

Creative Industries Federation CEO Caroline Norbury said the lead up to Christmas is a key time for many in the creative industries: "Further support will undoubtedly be needed as many creative organisations, only just starting to get back on their feet, will once again need to close their doors."

Dowden also wrote on Twitter that parks, gardens, and the grounds of historic gardens will remain open to the public. Confusingly, Government guidance lists 'botanic gardens' among 'entertainment venues' such as theatres, concert halls, cinemas, museums, and galleries that have been ordered to close.

Freelancers are set to struggle despite a boost for the Self-Employment Income Support Scheme (SEISS).

The Government has abandoned plans to introduce the Job Support Scheme this month, instead retaining the Coronavirus Job Retention Scheme, or furlough, and will pay 80% of November trading profits to freelancers.

This increases the money available to the self-employed to 55% of their profits between November and January. Freelancers will be able to claim for SEISS at the end of November, two weeks earlier than planned.

"This is further acknowledgement from the Government that its initial approach was insufficient," ISM Chief Executive Deborah Annetts said.

She called for SEISS eligibility to be expanded, for the increased payments to be extended, and for payments to cover at least 70% of trading profits.

"The increased rate of SEISS is only for the first month of the three-month grant period and three million self-employed workers continue to be excluded from receiving it at all.

"Maintaining a higher level of grant, expanding the eligibility criteria and developing a clear roadmap for the return of live performance are all now essential for preventing an exodus of highly skilled talent from our world-leading arts sector."

Paul Fleming, General Secretary of actors' union Equity, said members were feeling "a mixture of rage and confusion" about the lockdown announcements.

He said they would be "sickened" that self-employed workers were barely mentioned. About 40% of Equity members have not received money from the SEISS, Fleming claimed.

While film and television production can continue, theatre, circus and other live entertainment have been dealt "a body blow," Fleming said.

"Now the government has mandated their closure they must immediately look again at the lack of funds to safely create work, a proper insurance scheme to speed up opening, and adequate funding to protect infrastructure from pubs & clubs to the West End."

Access to culture was not "a luxury for the few," he said.

"Without the work Equity members do as artists, entertainers and creatives this winter would look unimaginably worse.”

Some organisations are pressing ahead with planned performances in spite of the changed circumstances.

Yvonne Arnaud Theatre is still planning a production of the Snow Queen for mid-December in lieu of its usual pantomime.

Director Joanna Read said "it may seem strange to be announcing this given the current circumstances, but we are optimistic that we can still deliver" an enjoyable and safe show during the Christmas season.

The 40-gallery London Collective is staying open late on Wednesday, while Artisans' Bazaar, an outdoor showcase in Dorset, was brought forward to Tuesday and Wednesday (November 3 and 4) following the lockdown announcement. An online version will run from Thursday.

Organiser Simon Gudgeon said he didn't want hard work to go to waste: "We know how important events like this are to these talented artisans, especially in the run-up to Christmas, so we are doing all we can to ensure that this event goes ahead."

Others are not able to fast-track their work. HOME has announced all its shows will be live streamed on a pay-what-you-decide basis.

"While it's devastating to have to close again, we have always known this was a possibility," CEO Dave Moutrey said.