Leaving the influential programme in a time of crisis would be "a travesty" - and unnecessary for devolved nations, campaigners say. 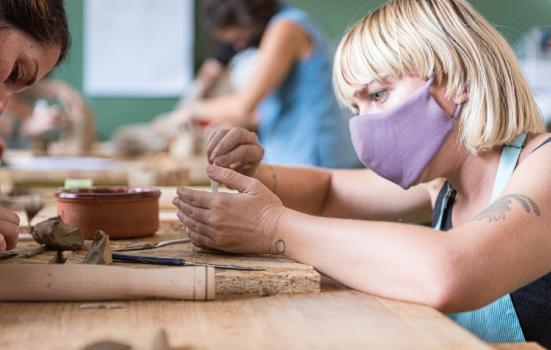 Scottish arts organisations vying to remain in Creative Europe say leaving is an unnecessary "travesty" that devolved nations can avoid.

With the quiet support of Creative Scotland, some beneficiaries of the programme are campaigning for the Scottish Government to establish new relationships with Creative Europe and education exchange programme Erasmus+ now that the UK has axed hopes for domestic replacements.

"Both education and culture are devolved matters so by rights we should be able to make our own decision about being part of an educational or cultural networks," Liz Gardiner, Director of Glasgow's Fablevision, said.

"It's just a travesty that we're being removed from what has been such a critical funding stream for the cultural sector."

Last week, the Creative Europe UK Desk, soon to be dismantled, published its evaluation of seven years of British involvement in the scheme.

"Companies... say they are stronger as a result of their participation in Creative Europe," the UK Desk's impact report says.

"It has increased their networks and access to talent, improved or diversified their business models, and supported them to generate a wide range of works that have received critical acclaim, and/or commercial or community impacts."

Participation in Creative Europe made cultural organisations more financially resilient to the challenges of Covid-19, according nearly two-thirds of those surveyed.

Securing match funding was a pre-condition of all Creative Europe project grants. Having that support from the European Union helped overcome initial funding gaps and leverage more money from arts councils, local authorities, private funders and other public bodies such as the NHS.

51% of culture subprogramme participants had secured other funding and income through their involvement in Creative Europe, attributing that to their greater visibility (86%) and credibility (75%).

Creative Europe has "had the direct effect of supporting jobs, increasing turnover and improving financial sustainability," the report said.

"This can make the difference between projects happening or not."

It notes this was especially true for Scotland, where the cultural sector is not always considered large enough to attract international finance.

"There isn't a lot of money, and connection and creativity is what matters."

Gardiner added: "It's actually the business model we have been developing over the past several years that's been trashed."

95% of culture subprogramme participants said Creative Europe offered them access to skills and knowledge they would not have accessed otherwise.

The report says there were "particularly strong impacts" on young artists'.

"Some suggest[ed] participation in Creative Europe-supported projects had improved their employability in a very competitive labour market."

Creative Carbon Scotland was involved in two Creative Europe projects: one with three international partners to find creative ways to increase green space, and a second working with Dutch partners on the Green Art Lab Alliance.

Director Ben Twist expressed doubt these projects could have happened without Creative Europe: "I think it would be harder."

Creative Carbon Scotland will continue leading Cultural Adaptations, its last Creative Europe project, until the end of March. An online conference will take place March 2 to 5.

"Scotland is a small place. I have been working in the arts for 35, 36 years. It [Creative Europe] brought me into contact personally with ideas that I knew nothing about," Twist said.

Audiences for Creative Europe projects are hard to quantify, but even a conservative underestimate places the culture subprogramme's reach at more than 5 million people.

Symington said Creative Europe presented a unique opportunity for her small company to broaden its reach.

"Yes, we could make a connection with someone in Italy or someone in Budapest, but the best [projects] are connected with different countries.

"For me, it's that collaboration aspect, not only with countries in Europe but with those larger organisations within Scotland."

Two third of respondents said their involvement attracted larger audiences, with 78% of cultural organisations saying their international audiences had grown in comparison to 55% of MEDIA subprogramme participants.

About a third of culture subprogramme beneficiaries believed their work had an impact on policy.

"By reducing the element of financial risk it has enabled collaborative, creative projects to progress, supported new talent and reached new markets in ways that would not otherwise have been possible," the report said.