An eight-point manifesto asks campaigning parties to commit to a National Arts Force and new Office for Cultural Exchange ahead of the country's election. 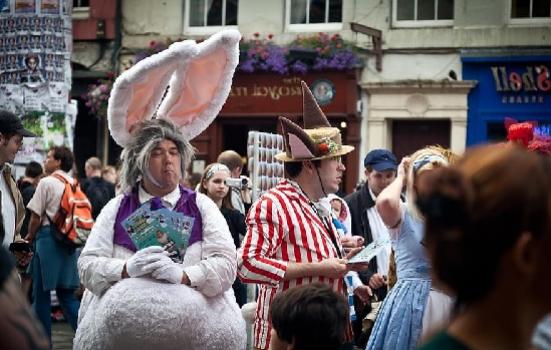 Scotland's festivals are world renowned - why aren't its other cultural outputs?

Major cultural organisations in Scotland are calling for a Culture Act as the country's election approaches.

An eight-point manifesto released by Culture Counts, an advocacy group for arts, culture, heritage and screen industries, asks candidates seeking election in May to commit to developing legislation similar to the Arts Act in Ireland, as well as an Office for Cultural Exchange to respond to the effects of Brexit and a National Arts Force to aid the sector's recovery from Covid-19.

A National Arts Force of freelance workers to be deployed across the cultural, education, and community sectors was first proposed by the Scottish Government in June.

A pilot will be launched soon. Culture Counts says lessons from this should be incorporated into the next Government's five-year plan.

The group also says the country's Covid-19 recovery plan should include a three-year funding guarantee for organisations like Creative Scotland - "the impact of one-year agreements is a major problem for our sector" - and investment for pilot test and trace systems to allow events, venues and festivals to restart as soon as possible.

"The cultural sector returns a positive impact for a relatively small investment... we generate positive outcomes in placemaking, in the visitor economy, in creative entrepreneurship and across mental, physical health, and recovery," the manifesto says.

Culture Counts Executive Leader Jennifer Hunter said the document provides "real opportunities for the next parliament to change some of the more problematic structures and norms" in the arts and cultural sectors.

"The cultural sector knows where it wants to be in five years and this manifesto is essentially a guide for policymakers of how to get there."

A Culture Act would require local authorities to have culture plans, the manifesto says.

Integrating culture into communities will mean engaging with a diverse array of stakeholders from local businesses to education and healthcare providers - even prisons - and supporting fair pay for freelancers.

But it also requires investment: Culture Counts suggests mandating a percentage of local infrastructure and property development projects be invested in local culture and introducing a visitor levy "when the time is right".

Schools too should have annual cultural plans, the group says. They "could submit their cultural plans to the Scottish Government via their local authority to demonstrate their compliance on children’s rights" to culture enshrined in international agreements.

And in healthcare, more joined-up thinking is needed.

"The opportunity to connect and the financial resources are currently missing and we must find a way to build these connections and strategically plan for the future," the manifesto says.

One contributor to the manifesto commented that "Scotland is an international player in the culture world, but does a terrible job with its PR".

"We have the festivals. We have Scottish design and we have tourism, but why is it that we do not seem to compete on a world stage in any other area where we are excellent across culture, arts and the creative industries?"

Up to 45% of the UK's creative industries exports are to European Union nations and the prohibitive cost of visas, work permits and local taxes could exclude Scotland from competing in that market.

"The Office for Cultural Exchange would support the cultural sector to connect with individuals, organisations and institutions across Europe and target countries; making Scotland an attractive partner for European Partnership Projects - even if we are a ‘third-country.'"