Scotland appears to be the first country in the UK to make a direct Government loan to ensure a cultural organisation can survive the current financial crisis. 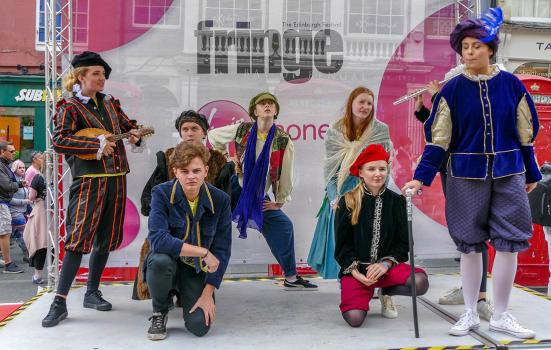 £1 million interest-free loan is being offered to Edinburgh Festival Fringe Society, with a pay-back period of 6 years. It is part of the Scottish Government’s commitment to supporting cultural, social and economic recovery.

The Fringe Society, which runs world’s largest performing arts festival, is also receiving a grant from the Government’s £149,000 Pivotal Enterprise Resilience Fund, which goes to SMEs that are considered to be vital to Scotland’s local or national economy but have been made vulnerable by this crisis. A further £100,000 grant is being made by City of Edinburgh Council. The combination of loans a grants go a long way towards plugging the estimated £1.5m revenue gap facing the Society.

The Fringe Society had told the UK Government that it was “facing insolvency” and said “a catastrophic year, brought on by Covid-19, could lead to the loss of Edinburgh’s infrastructure as the world’s leading festival city, and the pivotal role the Fringe plays for the UK creative Industries.” It said, unless financial support of £1m could be secured in this financial year it would “face significant costs with existential consequences”.

Since Covid-19 restrictions have been in place, the Scottish Government has been working with Creative Scotland and Festivals Edinburgh, who act on behalf of and represent Edinburgh’s Festivals in their work sustaining and developing Edinburgh as a world-beating festival city.

The measures they have taken include ensuring that as many existing commitments with artists and freelancers as possible are honoured, and repurposing the Government’s £2m EXPO budget and £1m PLACE budget to support the festivals.

Estimates put the value of the Fringe to the wider Scottish and UK economy at around £200m, and thousands of artists and cultural practitioners across the whole of the UK rely on the event for employment. The new money will be used to support those artists, companies and venues whose livelihoods have been affected, as well as to mitigate the significant losses incurred by the Fringe Society as a result of this year’s festival being cancelled.

Culture Secretary Fiona Hyslop, describing the Fringe as “one of Scotland’s greatest cultural exports”, said the funding package will help ensure the festival can bounce back in 2021.

CEO Shona McCarthy described it as “a life raft to the Fringe Society”, saying it will enable them to “properly support the extensive ecosystem of artists, venues and businesses who rely on the Fringe.”

The organisation was looking for an annual UK core grant to “provide an underlying stability to our charitable purposes and public good”. In its submission to the DCMS Committee’s inquiry into the Impact of Covid-19 on DCMS sectors, the Fringe Society said it had approached DCMS to support the UK creatives participating at the Fringe: “With over 3,200 shows appearing the UK (over 2,000 from England) it is important the UK Government recognises the Fringe for what it is, and does, for the UKs cultural sector. Ongoing DCMS core support could be transformative to the creative and culture sector across the whole of the UK.

“A strengthened Fringe Society (which would lead to a strengthened Fringe) and would reduce its reliance on single sources of income. Our futureproofing and resilience will require a more mixed economy model...This would enable us to cap our market share of the Fringe box office and therefore take less from the wider Fringe eco-system and provide more kick-back to artists, producers and venue operators. We could also reduce registration fees for artists and companies.”