RSNO Composers’ Hub will introduce emerging composers to the business context of a major orchestra whilst developing their skills and contacts. 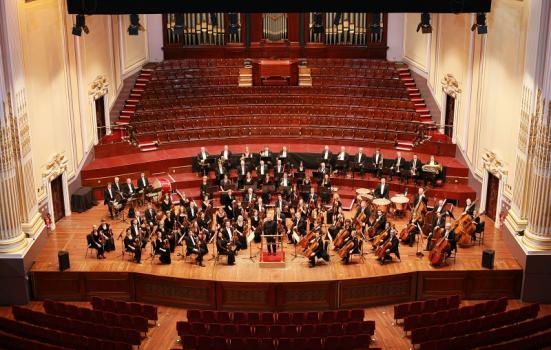 The RSNO with Music Director Peter Oundjian at Usher Hall

A new scheme for emerging composers will support them to gain a full understanding of the business workings of a major arts organisation whist writing for an orchestra in a range of different contexts. RSNO Composers’ Hub, a new initiative by the Royal Scottish National Orchestra (RSNO) supported by the PRS for Music Foundation, will see up to five early-career composers spending the 2015/16 season with the orchestra.

The pilot scheme will provide an opportunity for each composer to collaborate with the RSNO and other hub members over a sustained period. It aims to help them develop skills and creative relationships, as well as a better understanding of the orchestra, its audience and staff, who will guide them on the different artistic and business areas in which the organisation works. Working with the RSNO’s contemporary group, Alchemy, the composers will each write a ten-minute work for full symphony orchestra.

In October the RSNO will start the celebration of its 125th anniversary to coincide with the organisation’s relocation to a new, purpose-built rehearsal and performance space in the centre of Glasgow. The new Composers’ Hub scheme will culminate in a public workshop in the new auditorium in April next year, from which one work will be chosen to be performed by the RSNO as part of its 2016/17 Season.

RSNO Executive Producer Manus Carey said: “We are very excited to be launching the pilot year of our new Composers’ Hub, with support from PRS for Music Foundation…The breadth of the scheme will also mean it is an opportunity for our audiences to extend their knowledge of contemporary music and the compositional process.”